In this section we discuss shape parameters grains that depend on one dimensional projections, i.e.,

In order to demonstrate these parameters we first import a small sample data set.

The most well known projection based parameter is the diameter which refers to the longest distance between any two boundary points and is given in \(\mu m\).

The diameter is a special case of the caliper or Feret diameter of a grain. By definition the caliper is the length of a grain when projected onto a line. We may trace the caliper with respect to projection direction 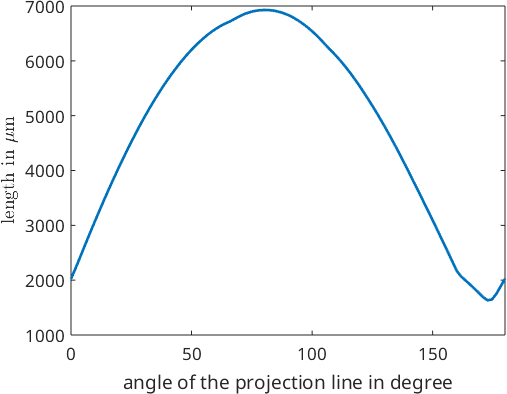 We observe that that maximum caliper is about 7000 while the minimum caliper is about 2000. We may compute the exact direction and length of the maximum or minimum by passing the options 'longest' or 'shortest' to the function caliper. In this case the the output is of type vector3d indicating the direction. The norm of the vector coincides with the caliper for this projection direction. Hence, the norm(grains.caliper('longest')) coincides with the diameter.

The difference between the longest and the shortest caliper can be taken as a measure how round a grain is.

This longest and shortest caliper are comparable to grains.longAxis and grains.shortAxis computed from an ellipse fitted to the grain. In the case of rectangular particles, one might not primarily be interested in the longest caliper of a grain but rather in the direction normal to the shortest caliper. This is computed when specifying the option 'shortestPerp'. If we imagine a very strong alignment of the long axes of orthorhombic particles, the maximum diameter may show a bimodal distribution (the two, roughly equally distributed diagonals of the particle). 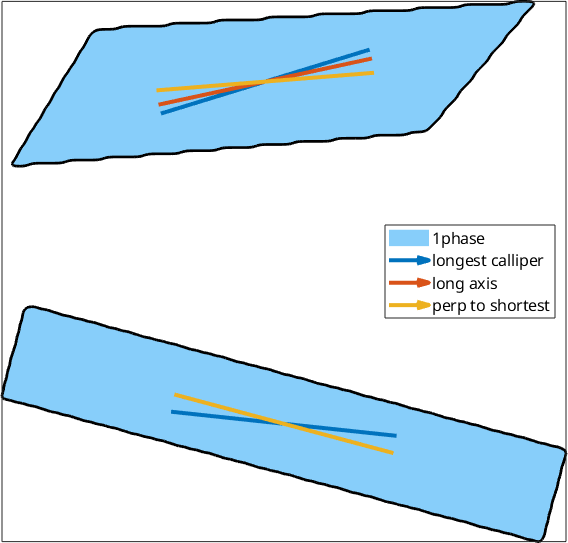 Another way of quantifying shape farbics is by making use of the cumulative projection function of the grains or the grain boundary segments. These methods are heavily inspired by Edwin A. Abbotts 'Flatland - A romance of many dimensions' (1884) and based on Panozzo, R., 1983, "Two-dimensional analysis of shape fabric using projections of digitized lines in a plane". Tectonophysics 95, 279-294. and Panozzo, R., 1984, "Two-dimensional strain from the orientation of lines in a plane." J. Struct. Geol. 6, 215-221. implemented in Mtex as grains.paror and grainBoudnary.surfor

As mentioned above the function caliper can be called with a list of angles and returns the projection length of all grains with respect to all angles.

The above averaged caliper can be computed more directly by the function grains.paror which returns the cumulative particle projection function normalized to 1. The projection angles can be regarded as the rotation angle of the particle (counterclockwise) while projecting from the y-axis onto the x-axis.

We can interpret the results in the following way. The minimum of the curve is a measure of the amplitude of the projection function and can be compared to an averaged axial ratio \(b/a\) of the entire fabric; isotropic fabrics would have a \(b/a\) close to 1 while highly anisotropic fabrics can be identified by small \(b/a\) values.

The smaller the difference between these values, the closer the fabric is to an orthorhombic symmetry.

Similarly to using the entire particle (the convex hull in case of the projection functions), we can use a distribution of lines grainBoudnary.surfor. This can be useful for the quantification of the grain boundary anisotropy or in general might be needed if we look at boundaries which do not form closed outlines, e.g. a list of subgrain or twin boundaries or the contact between certain phases.

Let's compare the boundaries between the different unlike phases and between forsterite-forsterite in our sample: 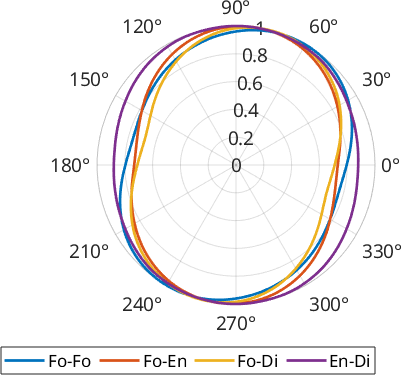 The characteristic shape results from the cummulative sum of all grain boundary segements ordered by the angle of the segment direction. It can be regarded as to represent the average grain shape, however without the need to use closed areas such as it would be required when working with grains. 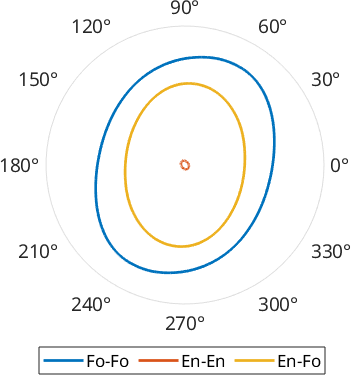 The output of the command characteristicShape is a shape2d object which behaves very similar to a grain2d object. Hence it is easy to derive things such as a long axis or e.g. the angle between the longest and the shortest caliper which can be regarded as a measure of asymmetry.