MTEX offers powerful functionalities to calculate with tensors and lists of tensors without the need of many nested loops.

Tensor product are the canonical way how tensors interact with each other. As an example consider a rank 4 stiffness tensor

Then by Hooks law the stiffness tensor acts on a strain tensor, e.g.,

according to the formula

and turns it into the stress tensor \(\sigma\). In MTEX such tensor products can be computed in its most general form by the command EinsteinSum.

and the inner product

where \(C = S^{-1}\) is the inverse of the comcompliance thensor, i.e. the stiffness tensor

Here we used the inv to compute the inverse of any rank 2 or rank 4 tensor. There are shortcuts in MTEX for specific tensor products. E.g. the relation between stress and strain can be more compactly written as a edouble dot product

Rotation a tensor is done by the command rotate. Let's define a rotation

Then the rotated tensor is given by 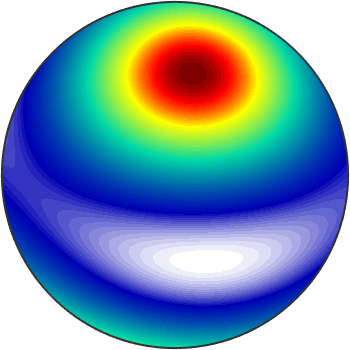 Here is another example from Nye (Physical Properties of Crystals, p.120-121) for a third-rank tensor