In case the map coordinates and the Euler angles in your data are with respect to different reference frames it is highly recommended to correct for this while importing the data into MTEX. This section explains in detail how to do this.

On Sreen Orientation of the EBSD Map

Many people are concerned when the images produced by MTEX are not aligned exactly as they are in their commercial software. It is indeed very important to understand exactly the alignment of your data. However, the important point is not whether a map is upside down on your screen or not. The important point is how your map aligns with the specimen, as we want to use the map to describe properties of the specimen.

There are basically two components in an EBSD data set that refer to the specimen reference frame: the spatial coordinates \(x\), \(y\) and the Euler angles \(\phi_1\), \(\Phi\), \(\phi_2\). To explain the difference have a look at the EDAX export dialog 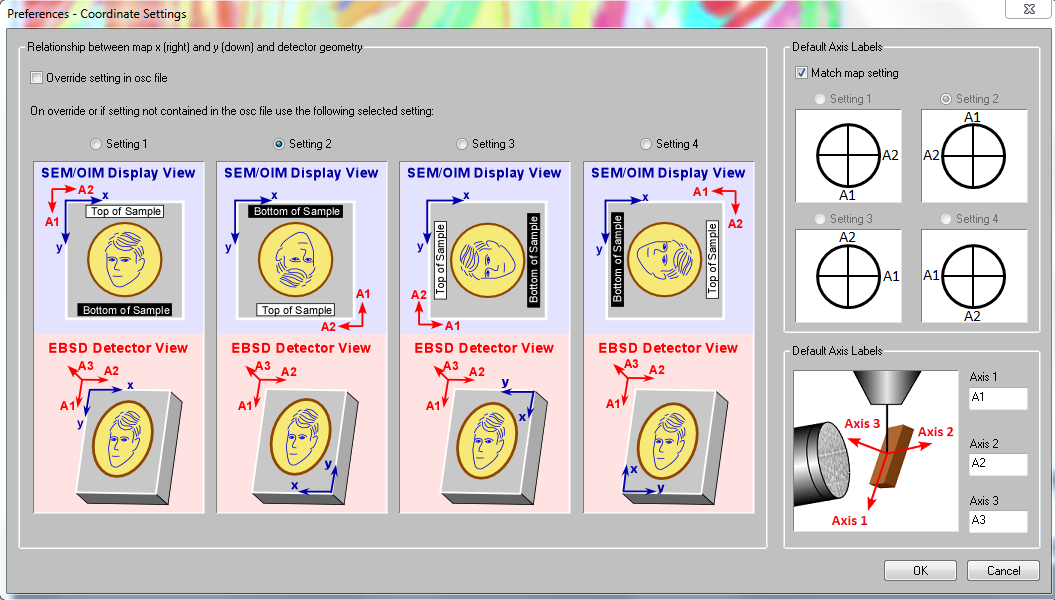 Here we have the axes \(x\) and \(y\) which describe how the map coordinates needs to be interpreted and the axes \(A_1\), \(A_2\), \(A_3\) which describe how the Euler angles, and in consequence, the pole figures needs to be interpreted. We see that in none of these settings the map reference system coincides with the Euler angle reference frame.

This situation is not specific to EDAX but occurs as well with EBSD data from Oxford or Bruker, all of them using different reference system alignments. For that reason MTEX strongly recommends to transform the data such that both map coordinates and Euler angles refer to the same coordinate system.

Doing this we have two choices:

In the case of EDAX data imported from an *.ang file we still need to specify the export option used by the EDAX software. This is done by the options 'setting 1', 'setting 2', 'setting 3' or 'setting 4'. 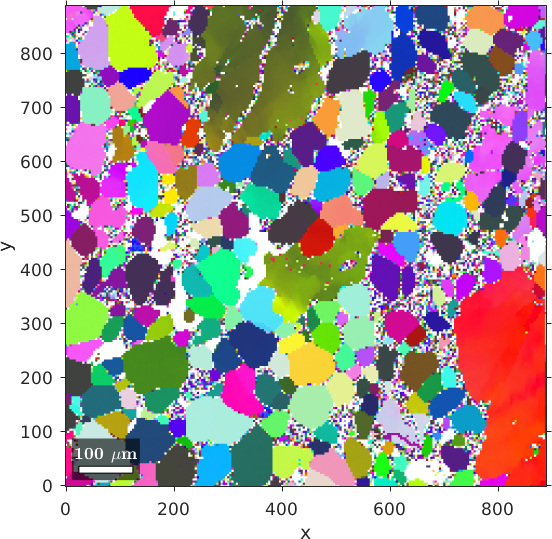 The plot does not yet fit the alignment of the map in the EDAX software as it plots the x-axis be default to east and the z-axis into the plane. This is only a plotting convention and can be set in MTEX by 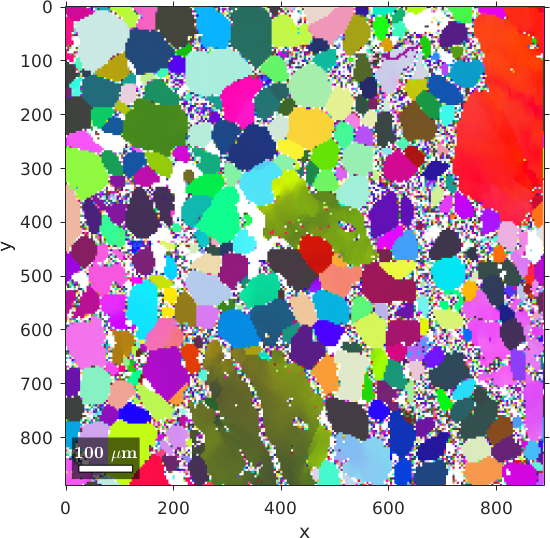 Other plotting conventions are plotx2north, plotx2west, plotx2south and plotzOutOfPlane. Note that these options only alter the orientation of the EBSD map and the pole figures on the screen but does not change any data.

One way of verifying the reference systems is to visualize crystal shapes on top of the orientation map. To do this we proceed as follows 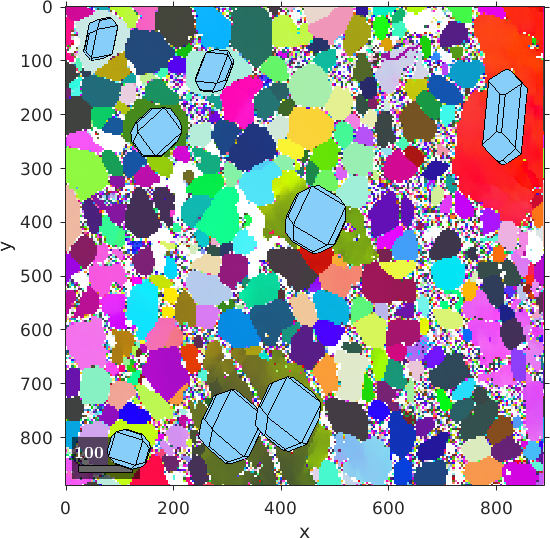 It may also be helpful to inspect pole figures

As pole figures display data relative to the specimen reference frame MTEX automatically aligns them on the screen exactly as the spatial map above, i.e., according to our last definition with x pointing towards east and y to the south.

In order to manually change the map reference frame one may apply a rotation to the map coordinates only. E.g. to flip the map left to right while preserving the Euler angles one can do 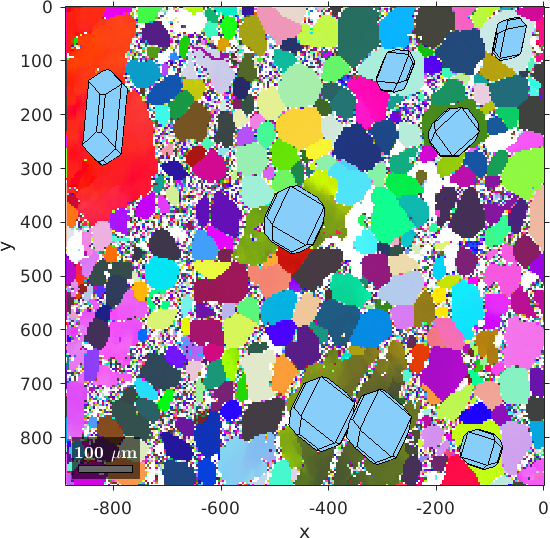 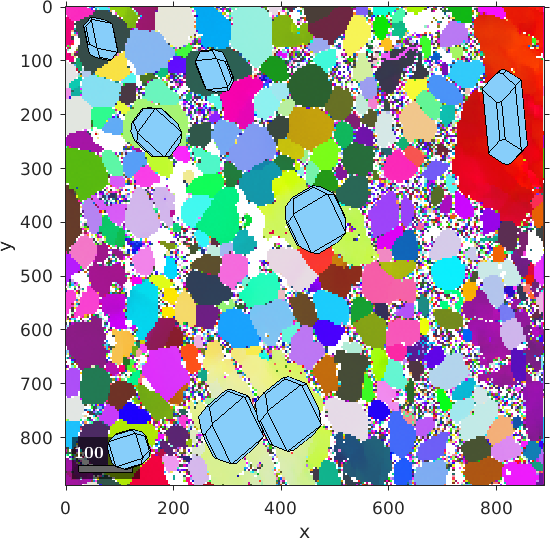 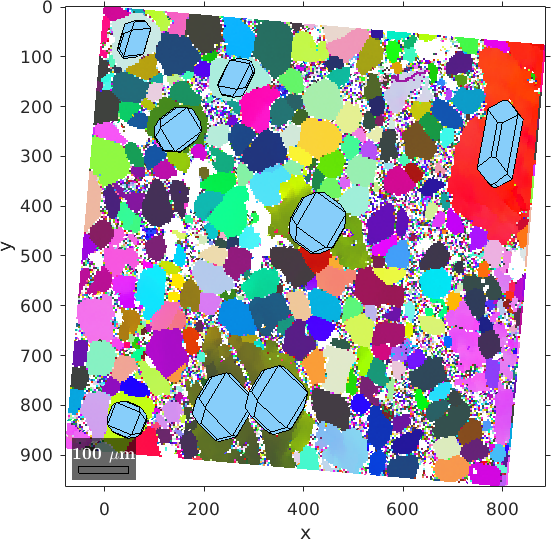