A quick guide on how to import and make basic plots with EBSD data in MTEX.

MTEX allows you to import EBSD from all big vendors of EBSD systems. Prefered data formats are text based data files like .ang, .ctf or open binary formats like .osc or .h5. Most conveniently, EBSD data may be imported using the import wizard, by typing 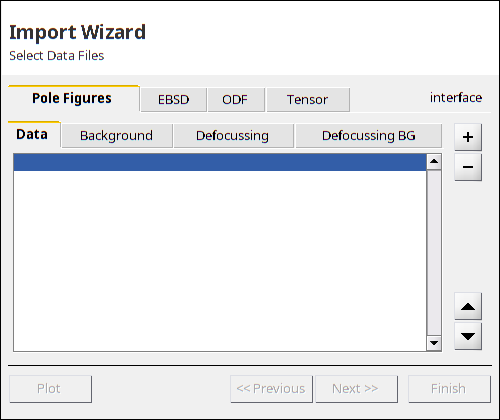 or by the command EBSD.load

This command outputs ebsd data stored in a single variable, called ebsd. This variable contains all relevant information, i.e., the spatial coordinates, the orientation information, a description of the crystal symmetries and all other parameters contained in the input data file.

In this example, the output above shows that the data set contains three different phases: Forsterite, Enstatite, and Diopside. The spatial distribution of the different phases can be visualized by the plotting command

When importing EBSD data it is critically important to align it correctly to a fixed reference frame. This issue is exhaustively discussed in the topic Reference Frame Alignment.

Analyzing orientations of an EBSD map can be done only for each phase seperately. The key syntax to restrict the data to a single phase is

Now we may restrict the variable to Forsterite orientations by

In this standard form a default color coding of the orientations is choosen. A more complete discussion about how to colorize orientations can be found in the topic IPF Maps.

MTEX contains a sophisticated algorithm for reconstructing the grain structure from EBSD data as described in the paper Grain detection from 2d and 3d EBSD data and the topic Grain Reconstruction. The syntax is

This creates a variable grains of type grain2d which containes the full geometric information about all grains and their boundaries. As the simplest application we may just plot the grain boundaries

In order to make the visualization of crystal orientations more intuitive MTEX supports crystal shapes. Those are polyhedrons computed to match the typical shape of ideal crystals. In order to overlay the EBSD map with crystal shapes orienteted accordingly to the orientations of the grains we proceed as follows.

One of the most important tools for analysing the orientations in an EBSD map are pole figure plots. Those answer the question of how selected crystal directions, here h, are aligned with respect to specimen directions

Analogously one can ask for the crystal directions pointing in a selected specimen direction. The resulting plots are called inverse pole figures. 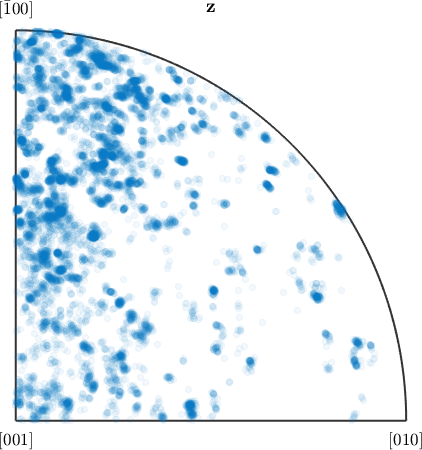