On this page, we want to cover the topic of function approximation from discrete values on the sphere. To simulate this, we have stored some nodes and corresponding function values which we can load. The csv-file contains the \(x\)-, \(y\)-, and \(z\)-component of the nodes and the function value in the fourth column. Lets import these data using the function load

The second output S is a struct that contains a field S.values with the function values from the fourth column. Next, we can make a scatter plot to see, what we are dealing with 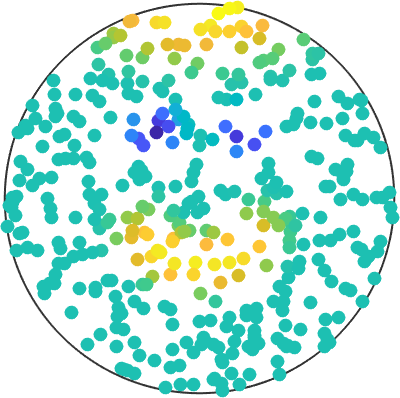 Now, we want to find a function which coincides with the given function values in the nodes reasonably well.

The idea of the first approach is fairly simple. We create a function which has exaclty the value of the given data in the nodes. But we still have to decide what happens inbetween these nodes. For that, we linearly interpolate between them, similarly as Matlat plots a one-dimensional function 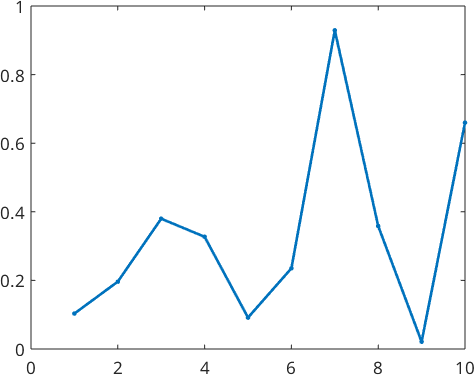 With some mathematics we can lift this concept to the sphere. This is done by the interp command of the class vector3d when the argument 'linear' is given

To see that we realy have the exact function values, we can evaluate sFTri of type S2FunTri and compare it with the original data values.

Indeed, the error is within machine precision. Now we can work with the function defined on the whole sphere. We can, for instance, plot it 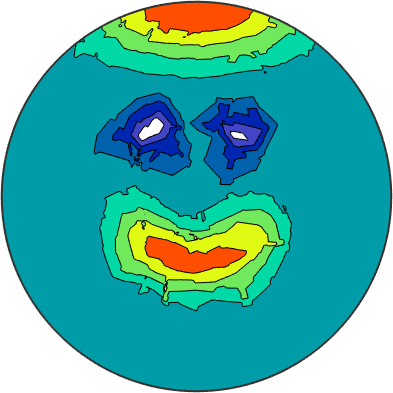 That does not look like the happy smiley face we had in mind. There are other variants to fill the gaps between the data nodes, still preserving the interpolation property, which may improve the result. But if we don't restrict ourselfs to the given function values in the nodes, we have more freedom, which can be seen in the case of approximation.

In contrast to interpolation we are now not restricted to the function values in the nodes but still want to keep the error reasonably small. One way to achieve this is to approximate it with a series of spherical harmonics. We don't take as many spherical harmonics as there are nodes, such that we are in the overdetermined case. In that way we don't have a chance of getting the error in the nodes zero but hope for a smoother approximation. This can be achieved by the interp command of the class vector3d when the argument 'harmnicApproximation' 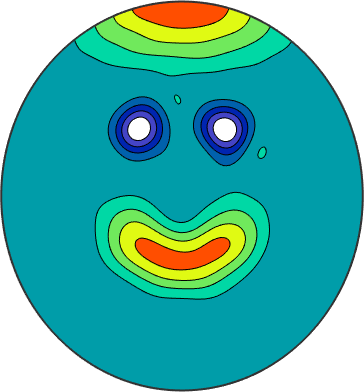 Plotting this function, we can immidiately see, that we have a much smoother function. But one has to keep in mind that the error in the data nodes is not zero as in the case of interpolation.

But this may not be of great importance like in the case of function approximation from noisy function values, where we don't know the exact function values anyways.

approximates our function. A basic strategy to achieve this is through least squares, where we minimize the functional

This can be done by the lsqr function of Matlab, which efficiently seeks for roots of the derivative of the given functional (also known as normal equation). In the process we compute the matrix-vector product with the Fourier-matrix multible times, where the Fourier-matrix is given by

This matrix-vector product can be computed efficiently with the use of the nonequispaced spherical Fourier transform NFSFT.