The following script is a quick guide through the grain reconstruction capabilities of MTEX. It uses the same data set as in the corresponding publication Grain detection from 2d and 3d EBSD data. Data courtesy of Daniel Rutte and Bret Hacker, Stanford.

The phase map shows a multi-phase rock specimen with Andesina, Quartz, Biotite and Orthoclase. Lets restrict it to a smaller region of interest. The rectangle is defined by [xmin, ymin, xmax-xmin, ymax-ymin].

Next we reconstruct the grains and grain boundaries in the region of interest, using a 15 degree orientation change threshold.

We may also visualize the different quarz orientations together with the grain boundaries.

For the map created, most of the phases are coloured based on where they exist, while only the Quartz phase is colored according to the orientation. The quartz orientations are colured using the following ipf color key 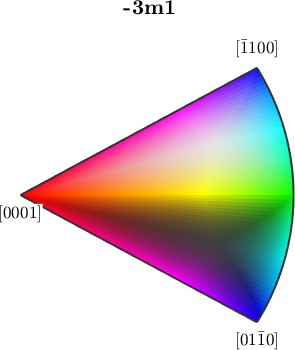 Alternatively, we may colorize each quarz grain according to its mean orientation. Again, the other phases are colured based on where they exist.

We can create a phase map with certain grain boundaries highlighted. In this case, we highlight where adjacent grains of Andesina and Orthoclase have a misorientation with rotational axis close to the c-axis.

We can also represent the angular misorientation data between these two phases as a histogram. 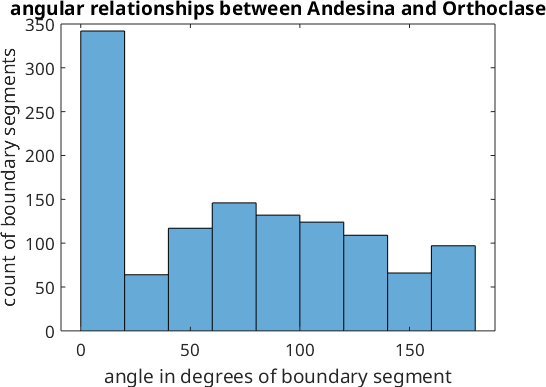