Commonly the crystal coordinate system is defined by the crystallographic axes \(\vec a\), \(\vec b\), \(\vec c\), The length [a,b,c] and the angles [alpha,beta,gamma] between theses axes needs to be specified when defining a variable of type crystalSymmetry.

Need of a Euclidean reference system

Note, that also the allignment of the crystal axes \(\vec a\), \(\vec b\) and \(\vec c\) with respect to the atomic lattice, and hence it symmetries, follows different conventions. These are discussed in the section Alignment of the Crystal Axes.

As for such symmetries this is also the default in MTEX there is no need to specify the alignment seperately. 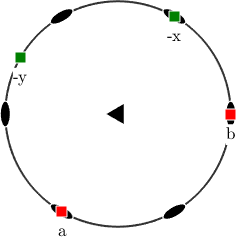 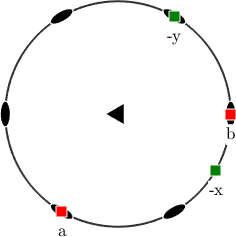 The only difference between the above two plots is the position of the \(\vec x\) and \(\vec y\) axes. The reason is that visualizations relative to the crystal reference system, e.g., inverse pole figures, are in MTEX aligned on the screen according to the b-axis.

This on secreen alignment can be easily modified by 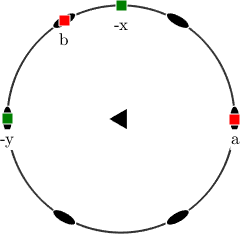 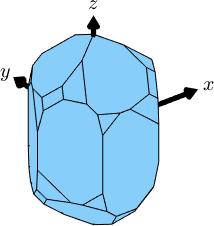 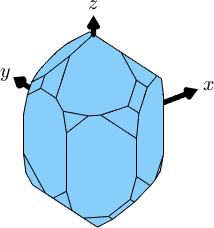 Most important is the difference if Euler angles are used to describe orientation. Lets consider the following two orientations

and visualize them in a pole figure. 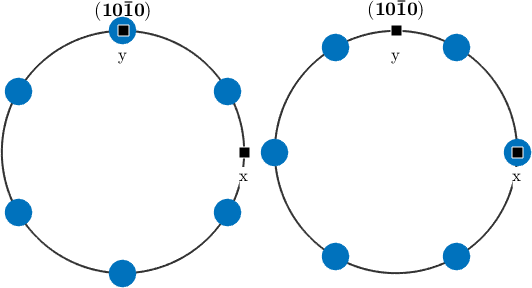 We observe that both pole figures are rotated with respect to each other by 30 degree. Indeed computing the misorientation angle between both orientations gives us