This examples models the texture evolution of rolled magnesium under unixaxial tension using the Taylor model. The undeformed material is assumed to have a basal fibre texture perpendicular to tension direction. Then tension experiment has been performed twice: at room temperature and at 250 degree Celcius. The strain at fracture was approx. 30 percent and 70 percent, respectively.

First we need to set up hexagonal crystal symmetry.

Setting up the basal fibre texture

Second, we set up the initial fibre texture which has the c-axis perpendicular to the (x,y)-sheet plane and the a-axes are randomized. This is typical for rolled Mg-sheet

define crystal orientations of interest for polefigures and plot figure

Setting up the slip systems

The critical resolved shear stresses (CRSS) needed to activate certain slip systems is temperature AND material dependant. As it is not trivial to measure/define CRSS, there are many different values in literature.

In practise, at room temperature basal slip dominates and commonly simple tension twins are activated as well (they have very low CRSS). During tension stress perpendicular to the c-axis tension twinning cannot occur. Thats why it is sensible to only define compression twins (which in Mg have a very high CRSS)

At higher temperatures the CRSS of non-basal slip systems decreases.

Due to constant volume law, the sum of all strains must equal zero. Here slightly anisotropic strain is assumed at room temperature, with more thinning in y-direction than in z-direction. In practise the anisotropy of Mg at high temperatures becomes negligible.

Apply the Taylor spin to the initial orientation distribution 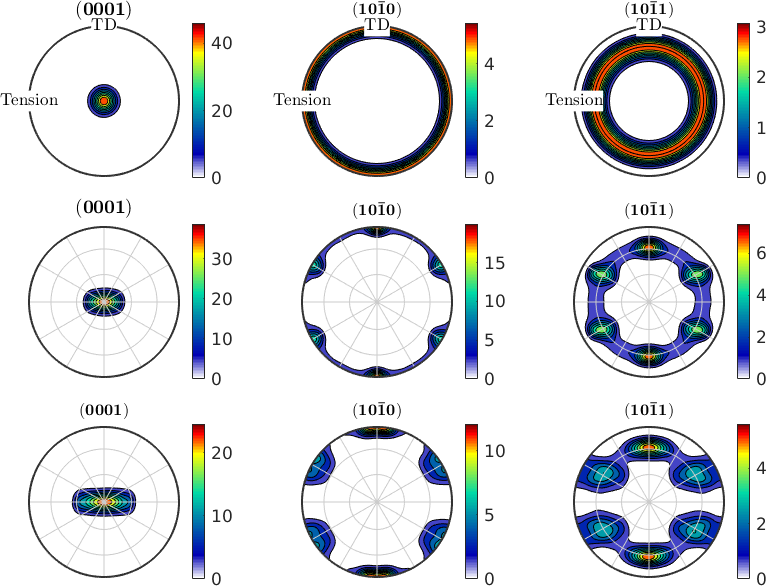 By adding up the coefficients of the taylor calculation and grouping them according to their slip system type, a bar chart can be plotted

The results can be plotted with logarithmic scale for better visualization 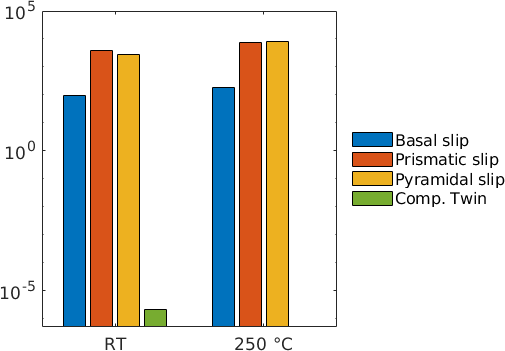