In this section we discuss geometric properties of grains that are related to ellipses fitted to the grains. Additionally to the orientation omega, and the lengths a, b of the long axis and short axes that are computed by the command [omega,a,b] = grains.fitEllipse the following properties based on the fitted ellipses are avaiable.

In order to demonstrate these properties we start by reconstructing the grain structure from a sample EBSD data set.

The basic command for fitting ellipses is fitEllipse

The returned variable omega is the angle describing the rotation of the ellipses and a and b are the length of the longest and shortest half axis. The midpoints of the ellipses can be computed by the command grains.centroid. Note, that the ellipses are scaled such that the area of the ellipse coincides with the actual grain area. Alternatively, one can also scale the ellipse to fit the boundary length by using the option boundary.

The direction of the long and the short axis of the fitted ellipse can be obtained by the comands grains.longAxis and grains.shortAxis. These directions are only well defined if the fitted ellipse is not to close to a perfect circle. A measure for how distinct the ellipse is from a perfect circle is the aspect ratio which is defined as the quotient \(a/b\) between the longest and the shortest axis. For a perfect circle the apect ratio is \(1\) and increases to infinity when the ellipse becomes more and more elongated.

Lets colorize the grains by their apect ratio and plot on top the long axis directions:

If we look at grains, we might wonder if there is a characteristic difference in the grain shape fabric between e.g. Forsterite and Enstatite. In contrast to crystal prefered orientations which which describe on the alignment of the atome lattices the shape prefered orientation (SPO) describes the algnment of the grains by shape in the bulk fabric.

Instead of the histogram we may also fit a circular density distribution to the to the long axes using the command calcDensity. 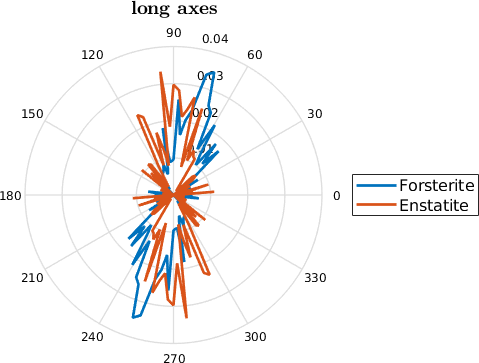 Alternatively, we may wonder if the common long axis of grains is does suitably represented by the direction normal to the shortest caliper of the grains. This can particularly be the case for aligned rectangular particles. The command calcTDF also takes a list of angles and a list of weights or lengths as input 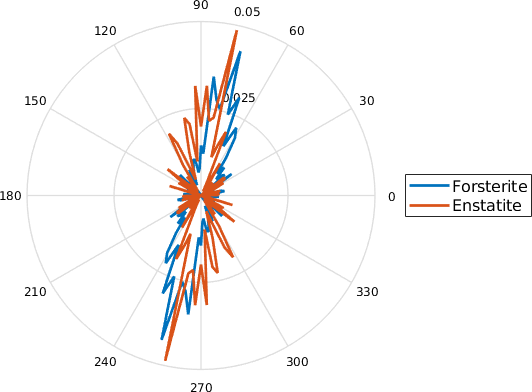 We can also smooth the functions with a wrapped Gaussian 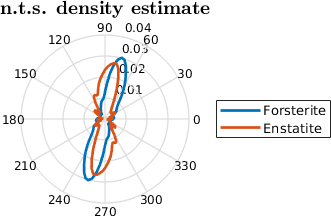 Because best fit ellipses are always symmetric and the projection function of an entire grain always only consider the convex hull, grain shape fabrics can also be characterized by the the length weighted rose diagram of the directions of grain boundary segments. 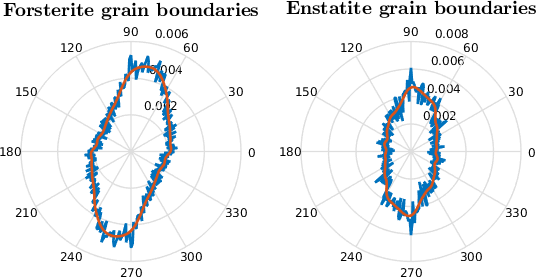 Note that this distribution is very prone to inherit artifacts based on the fact that most EBSD maps are sampled on a regular grid. We tried to overcome this problem by heavily smoothing the grain boundary. The little peaks at 0 and 90 degree are very likely still related to this sampling artifact.

If we just add up all the individual elements of the rose diagram in order of increasing angles, we derive the characteristic shape. It can be regarded as to represent the average grain shape. 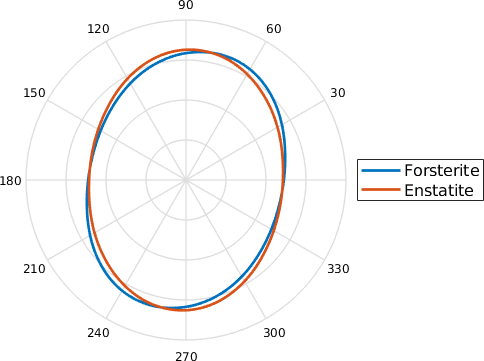 We may wonder if these results are significantly different or not TODO: get deviation from an ellipse etc