This script demonstrates the grain graph approach to parent phase reconstrution in a martensitic material. The methods are described in more detail in the publications

We shall use the following sample data set. 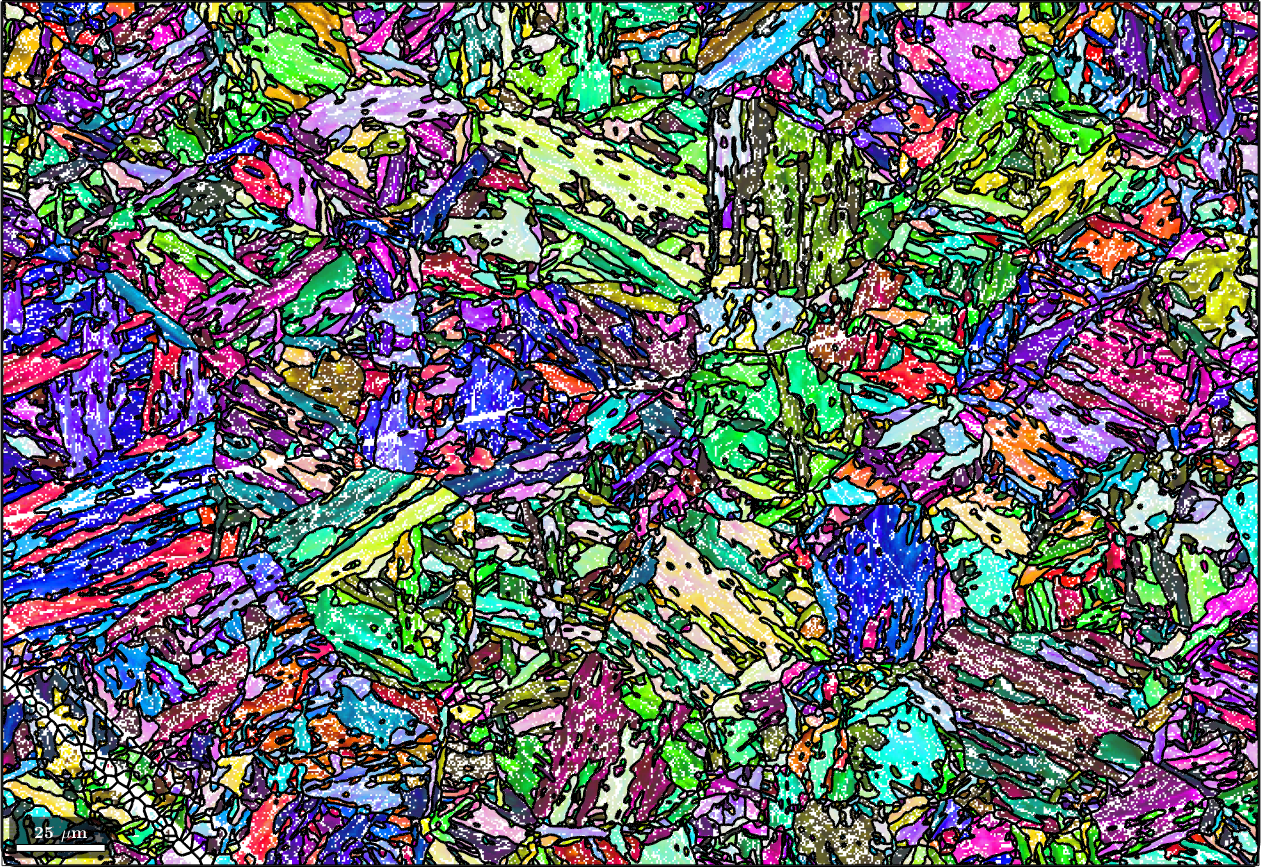 Grain reconstruction is guided in MTEX by a variable of type parentGrainReconstructor. During the reconstruction process this class keeps track about the relationship between the measured child grains and the recovered parent grains.

The parentGrainReconstructor guesses from the EBSD data what is the parent and what is the child phase. If this guess is not correct it might be specified explicitely by defining an initial guess for the parent to child orientation relationship first and passing it as a third argument to parentGrainReconstructor. Here we define this initial guess seperately as the Kurdjumov Sachs orientation relationship

The output of the variable job tells us the amount of parent and child grains as well as the percentage of already recovered parent grains. Furthermore, it displays how well the current guess of the parent to child orientation relationship fits the child to child misorientations within our data. In our sample data set this fit is described by the 4 quintiles 2.5°, 3.5°, 4.5° and 5.5°. 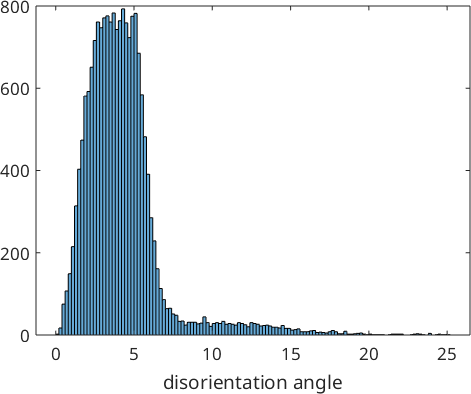 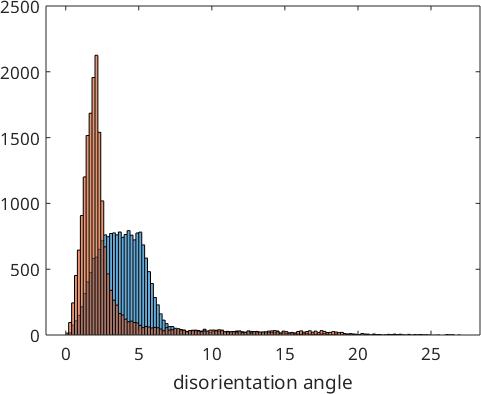 We may explicitely compute the misfit for all child to child boundaries using the command calcGBFit. Beside the list fit it returns also the list of grain pairs for which these fits have been computed. Using th command selectByGrainId we can find the corresponding boundary segments and colorize them according to this misfit. In the code below we go one step further and adjust the transparency as a function of the misfit. 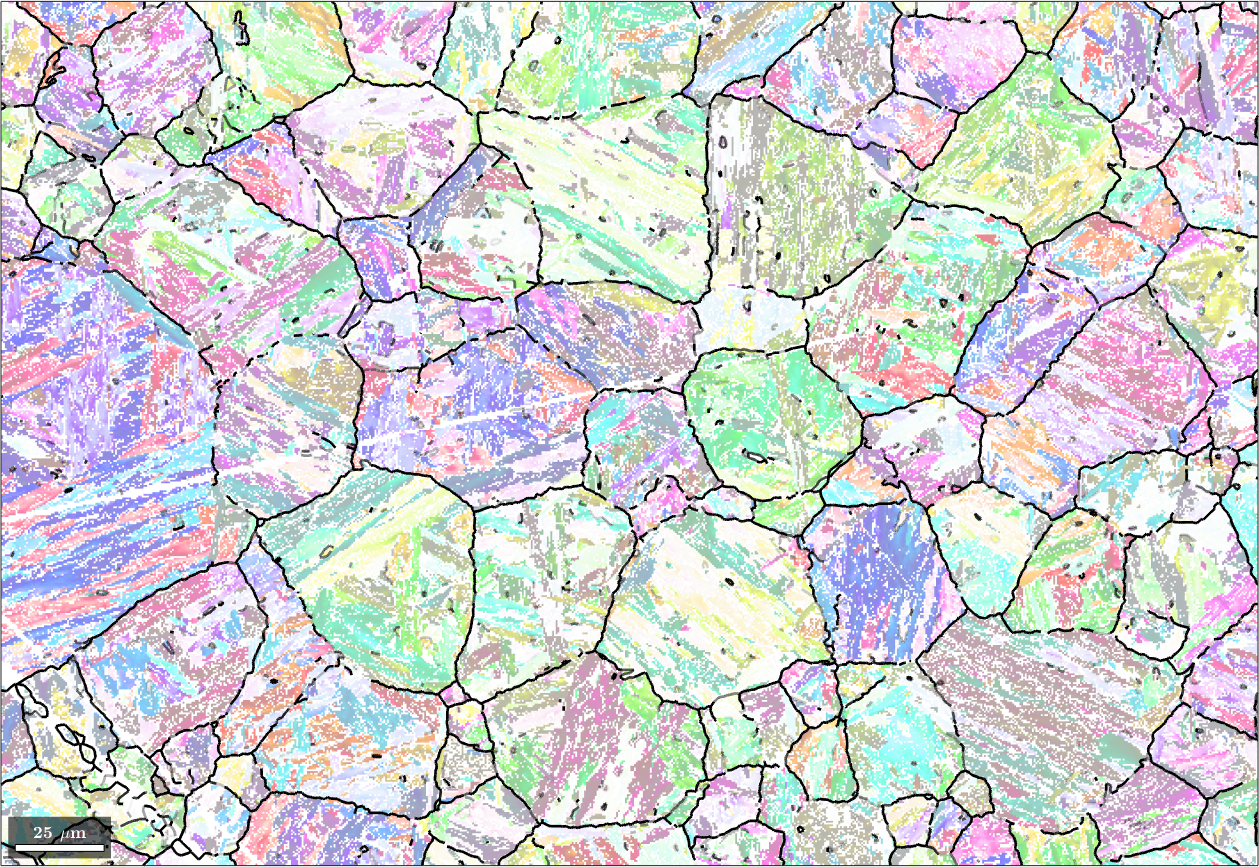 We may visualize th graph adjusting the edgeAlpha of the boundaries between grains according to the edge value of the graph. This can be accomplished by the command plotGraph 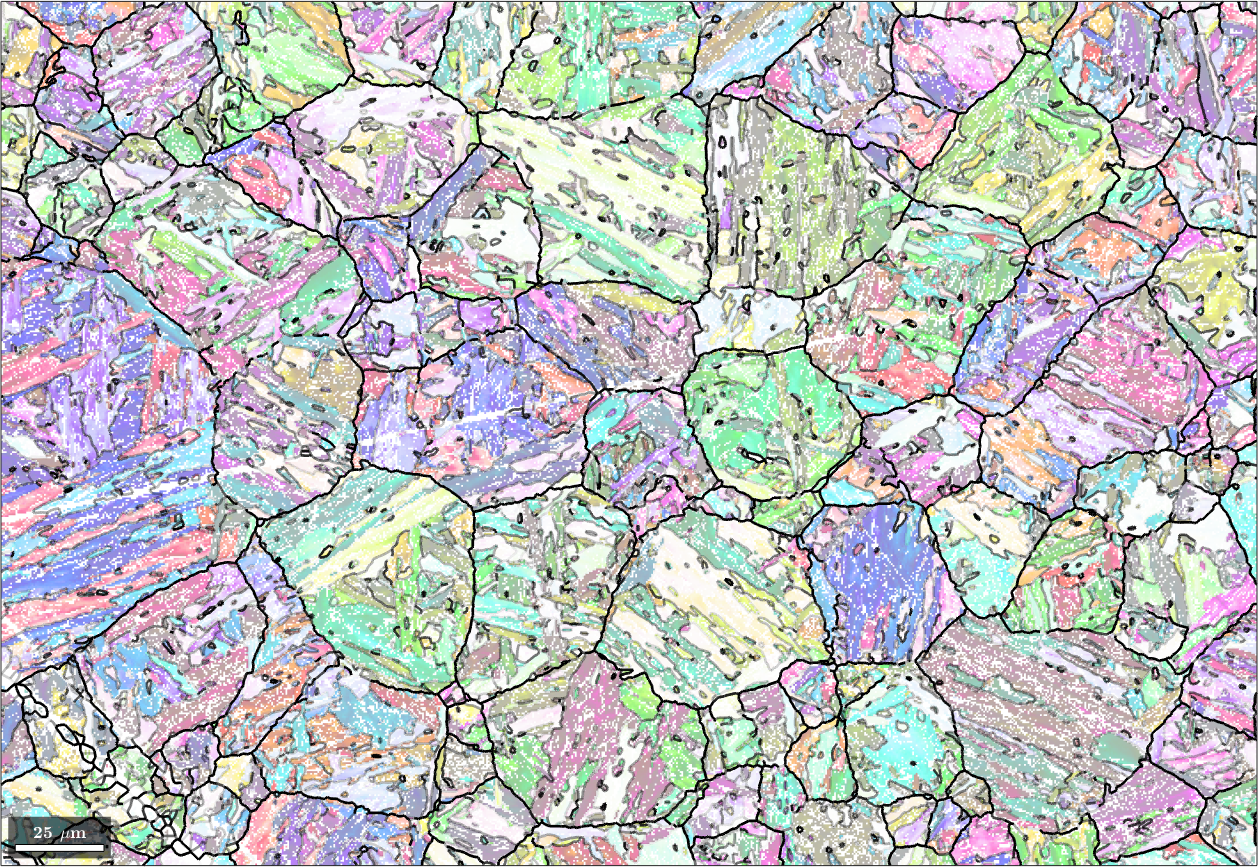 The next step is to cluster the graph into components. This is done by the command clusterGraph which uses by default the Markovian clustering algorithm. The number of clusters can be controlled by the option 'inflationPower'. A smaller inflation power results in fewer but larger clusters. 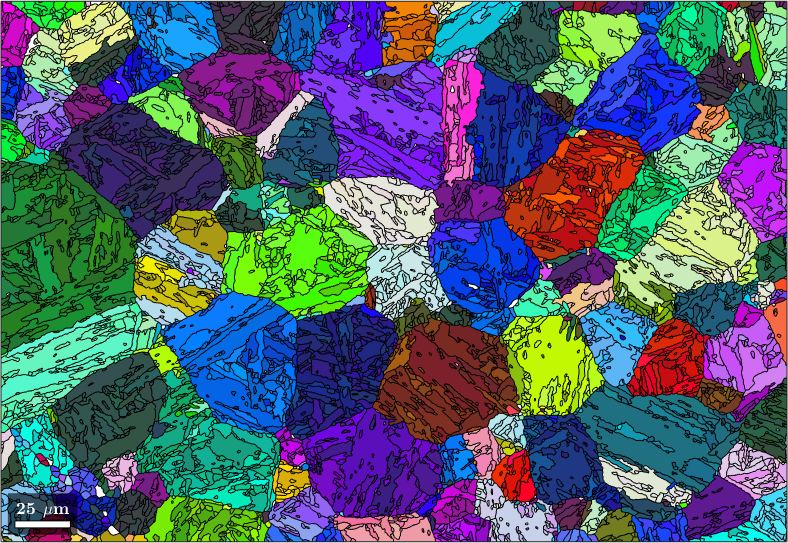 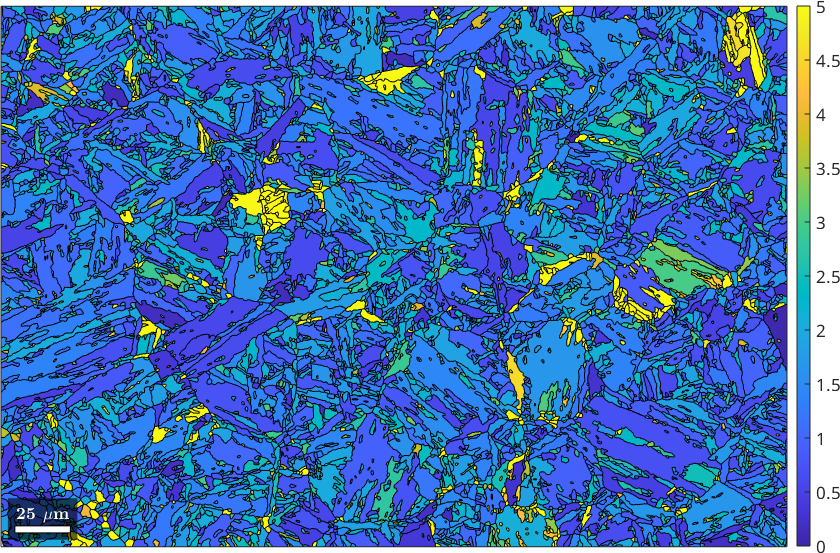 We may use these quantities to undo the parent orientation reconstruction for child grains with a misfit exeeding a certain threshold or belonging to a too small cluster. This can be done by the command job.revert 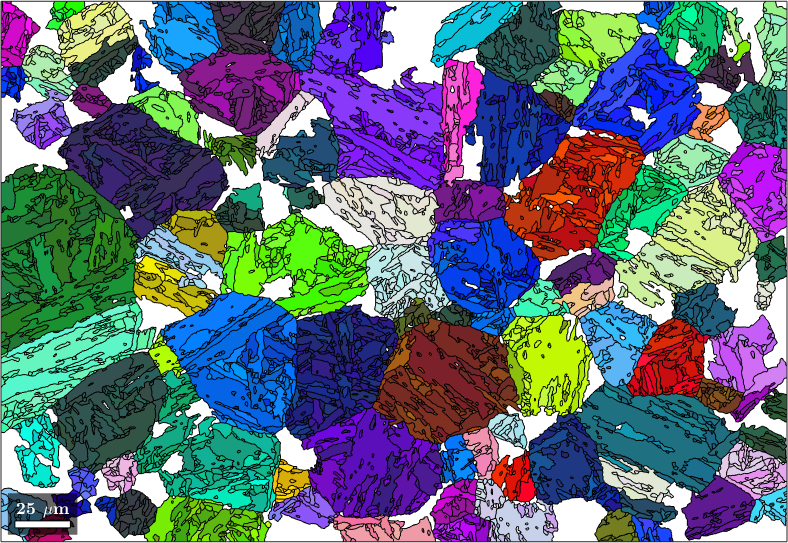 When used without any input argument job.revert will undo all reconstructed parent grain. This is helpfull when experimenting with different parameters. 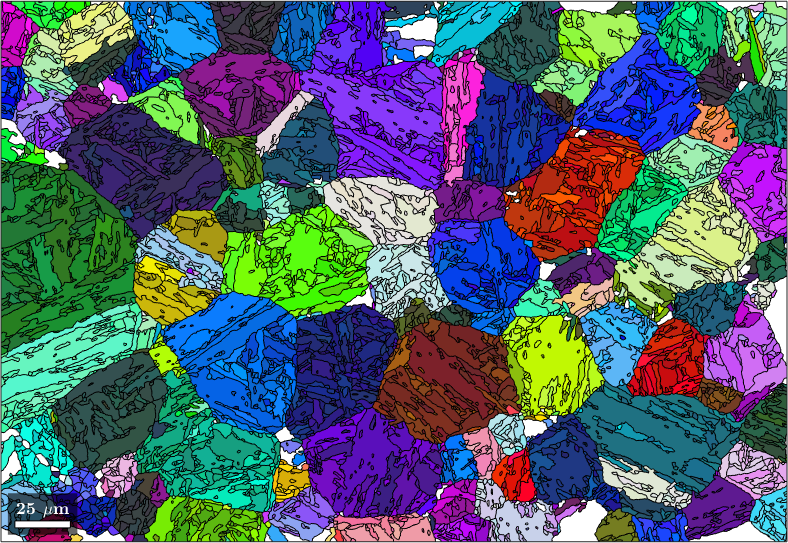 We observe that we have many neighbouring parent grains with similar orientations. These can be merged into big parent grains using the command mergeSimilar 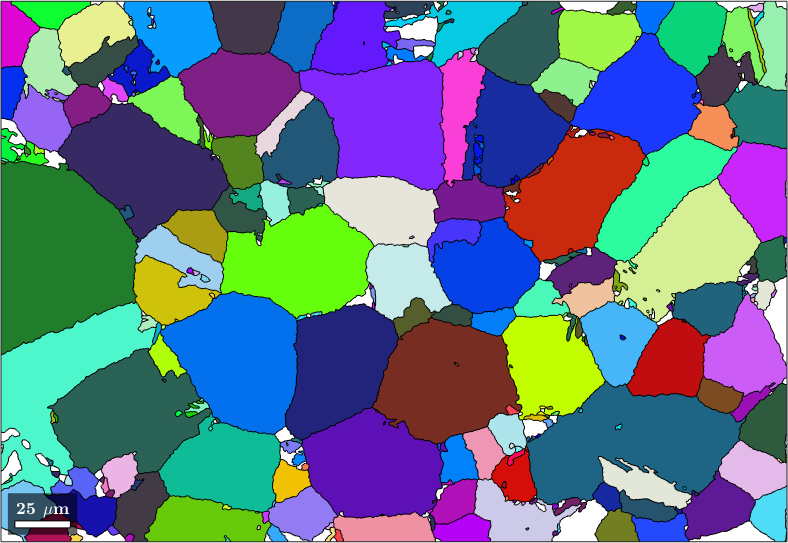 We may be still a bit unsatisfied with the result as the large parent grains contain many poorly indexed inclusions where we failed to assign to a parent orientation. We may use the command mergeInclusions to merge all inclusions with fever pixels then a certain threshold into the surrounding parent grains. 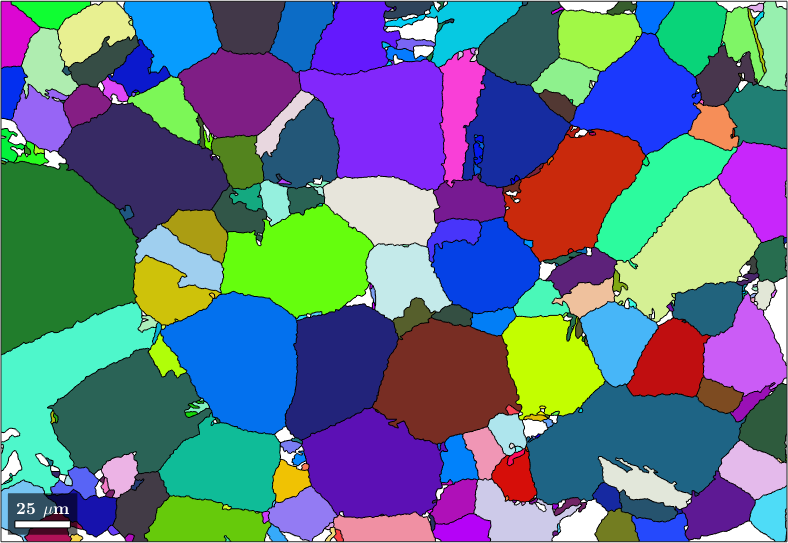 Knowing the parent grain orientations we may compute the variants and packets of each child grain using the command calcVariants. The values are stored with the properties job.transformedGrains.variantId and job.transformedGrains.packetId. The packetId is defined as the closest {111} plane in austenite to the (011) plane in martensite. 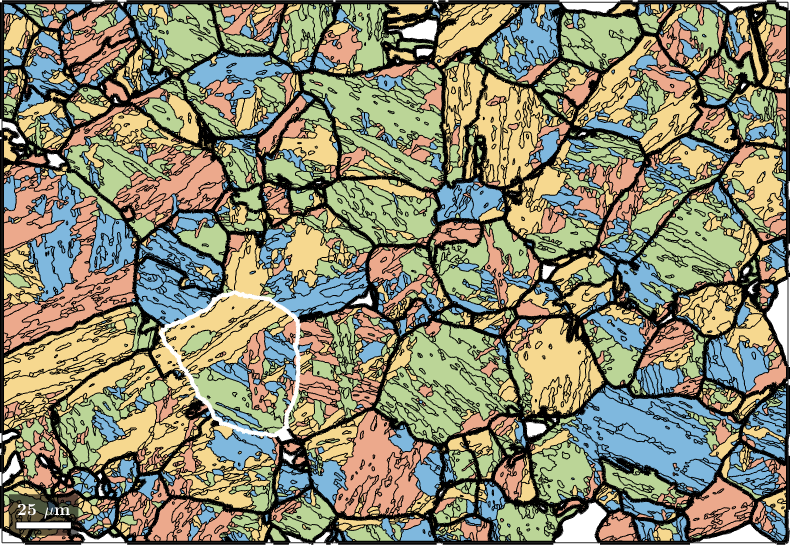 We can also directly identify the child grains belonging to the selected parent grains. Remeber that the initial grains are stored in job.grainsPrior and that the vector job.mergeId stores for every initial grain the id of the corresponding parent grain. Combining these two information we do 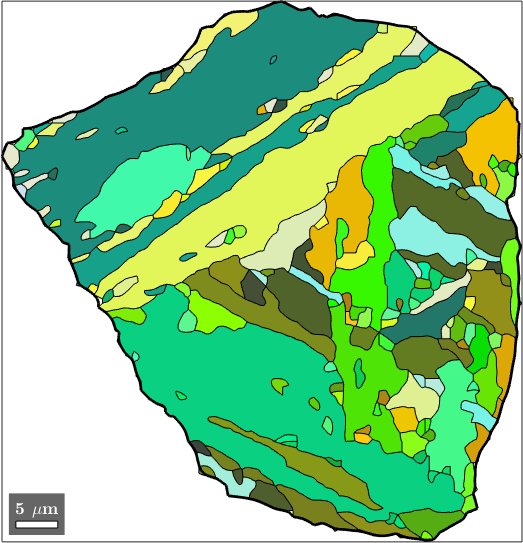 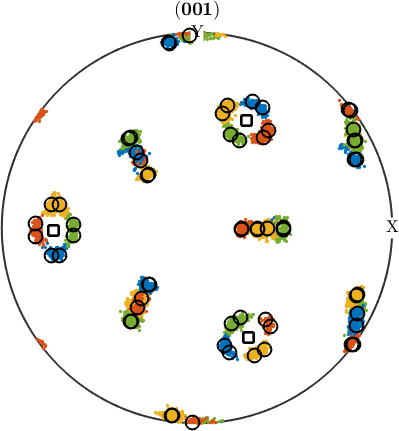 So far our analysis was at the grain level. However, once parent grain orientations have been computed we may also use them to compute parent orientations of each pixel in our original EBSD map. This is done by the command calcParentEBSD 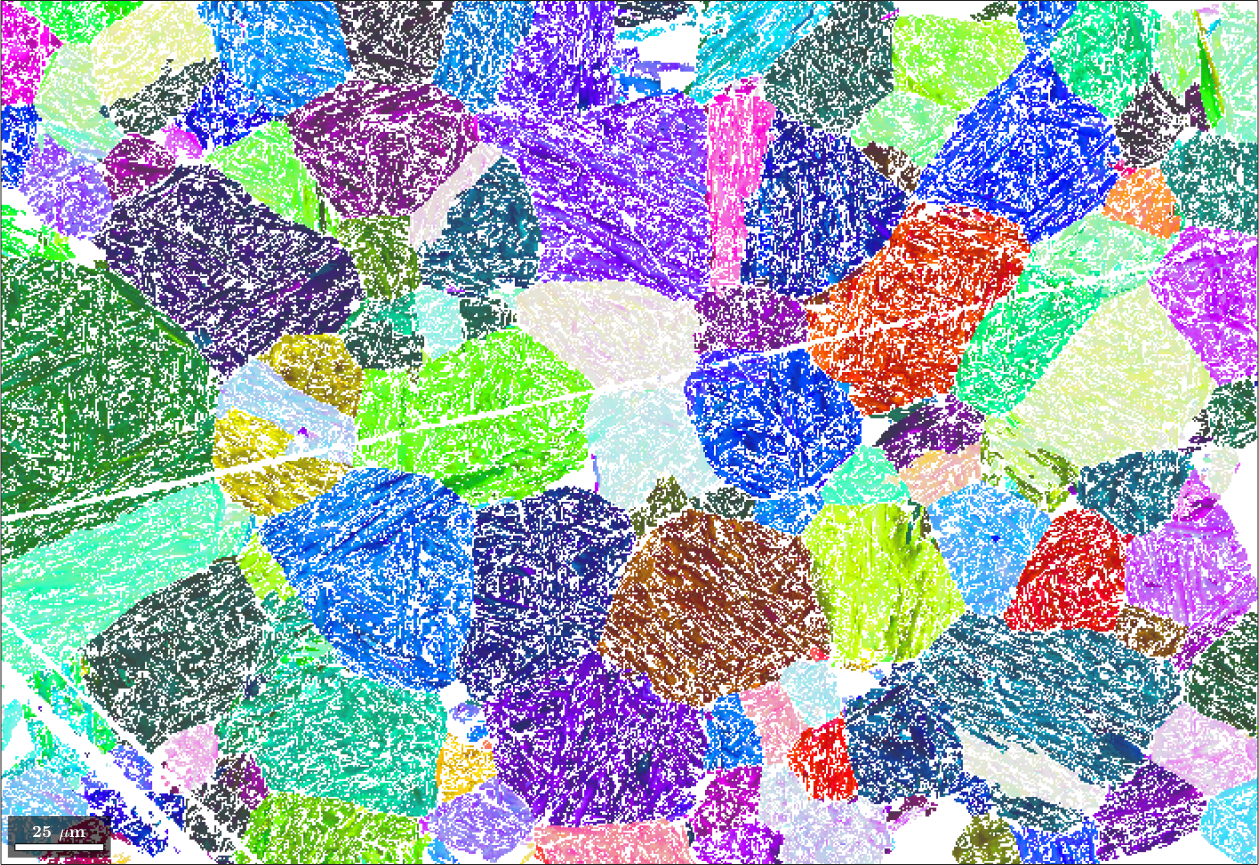 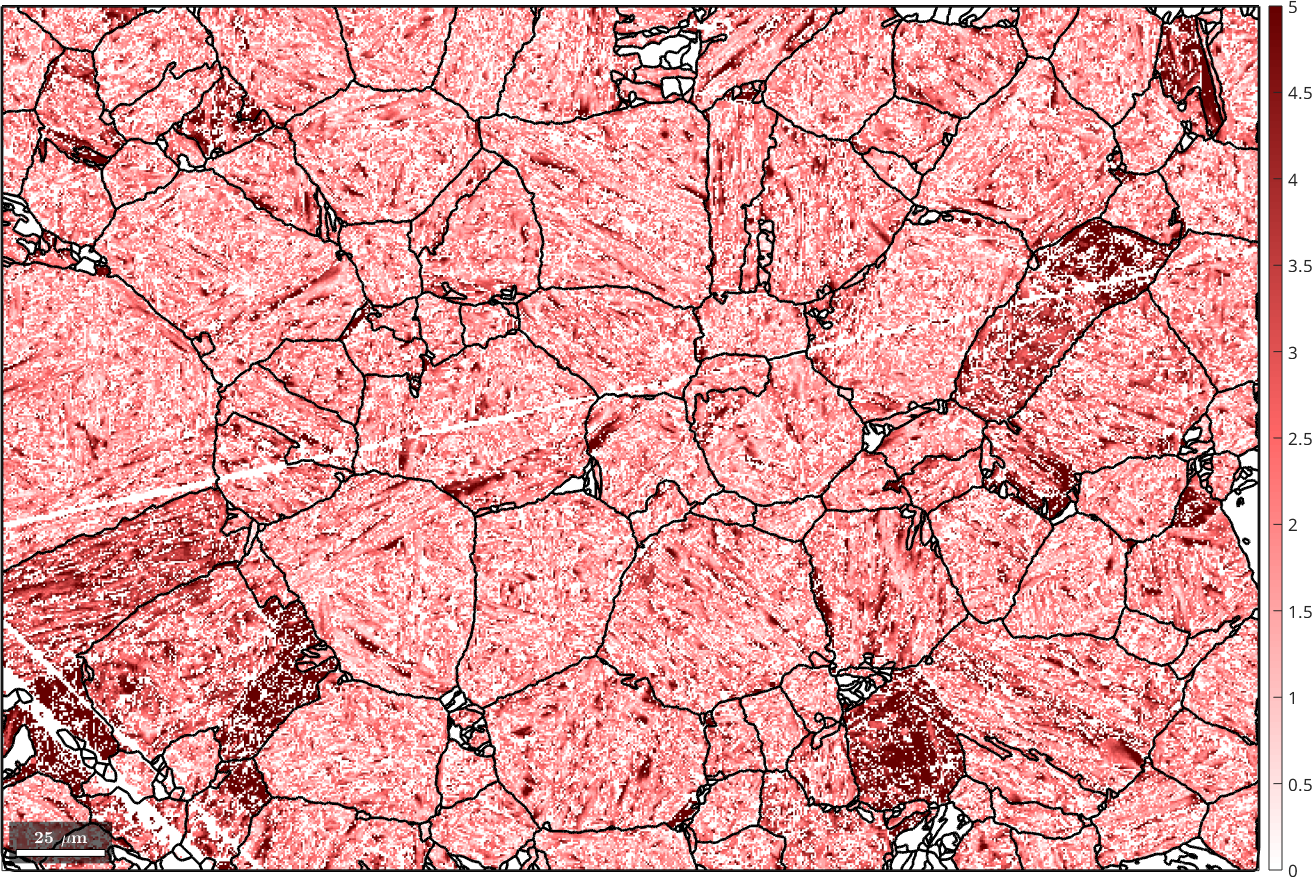 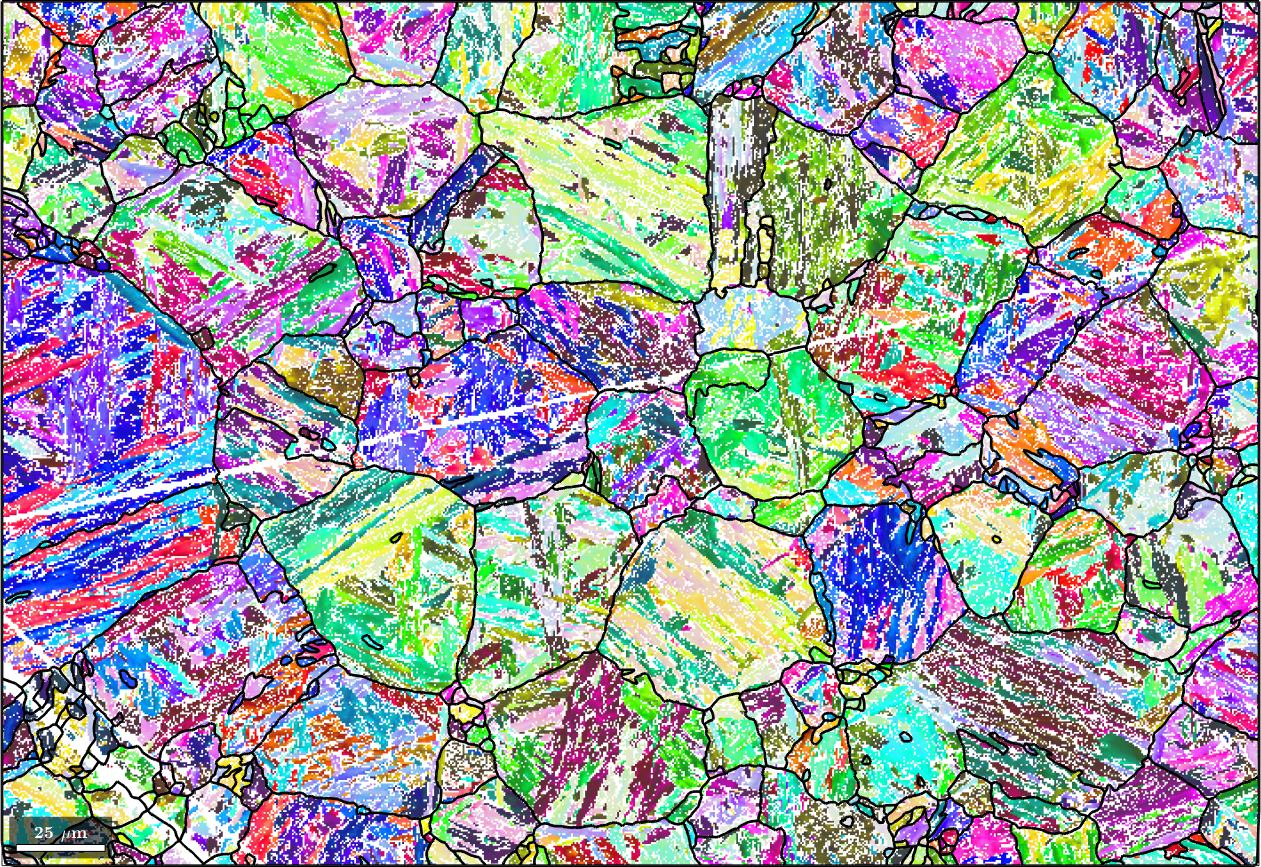 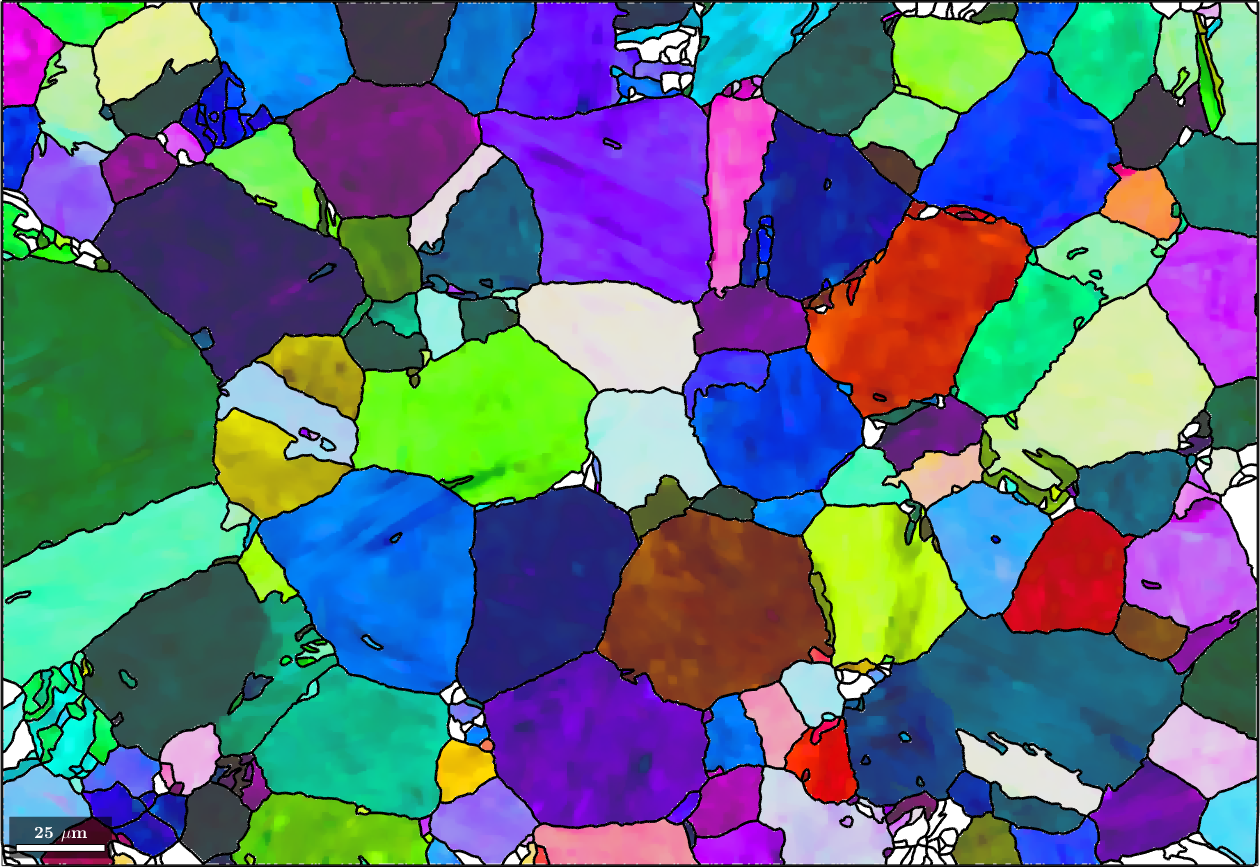