In this section we discuss properties of grains that are related to the distribution of orientations within the grains, i.e.,

As usual, we start by importing some EBSD data and computing grains 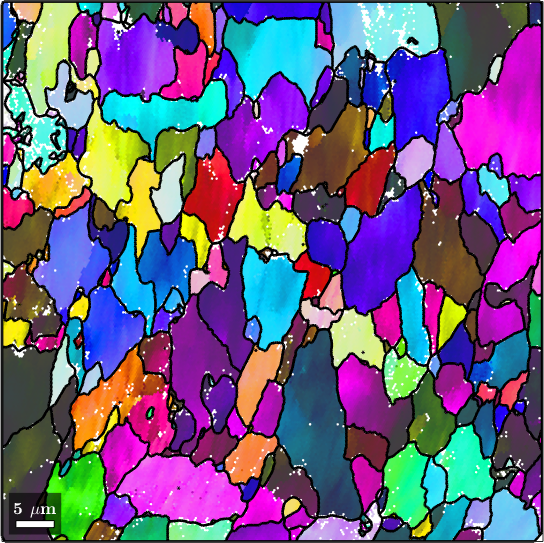 We could now use the command mean to compute the grain average orientation from these individual orientations. A more direct approach, however, is to access the property grain.meanOrientation which has been filled with the mean orientations during grain reconstruction. 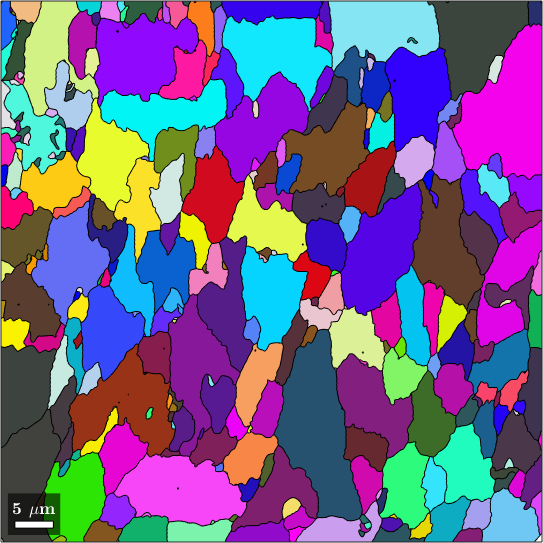 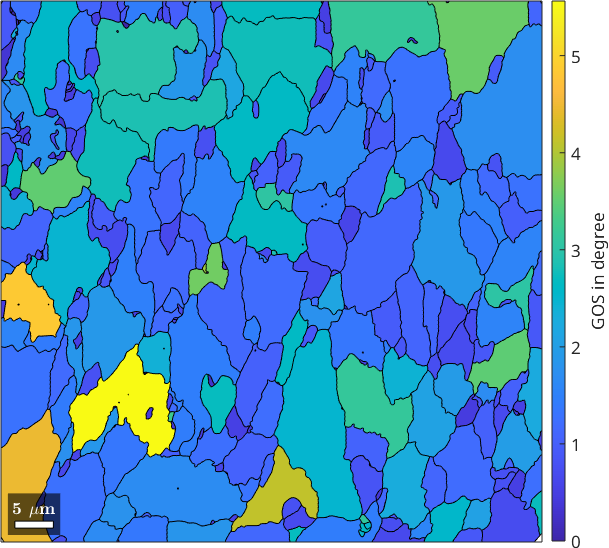 It should be noted that the GOS is also directly available as the grain property grains.GOS.

The function grainMean can also be used to compute the maximum misorientation angle to the mean orientation within each grain. To achieve this we have to pass the function @max as an additional argument. Note, that you can replace this function also with any other statistics like the median, or some quantile. 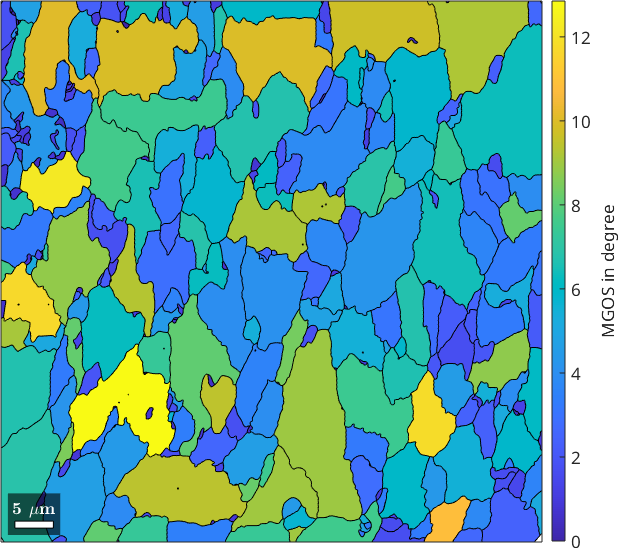 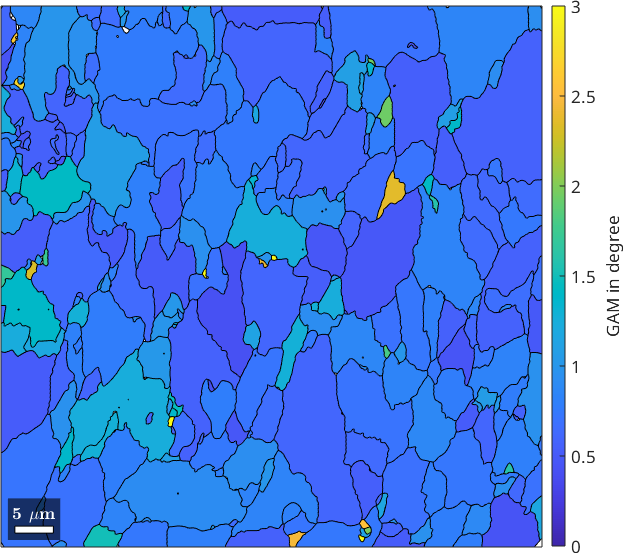 While the GOS measures global orientation gradients within a grain the GAM reflect the average local gradient.

Under certain conditions, deformation may result in the dispersion of orientations within a grain. This can usually be the case when deformation is accommodated by slip on one dominant slip system for each grain and conditions are such, that the resulting orientation gradients are preserved in the material (as it is the case in many geomaterials deforming at moderate temperatures). In such a case, we would expect the orientations inside a grain to be aligned along a line with a specific misorientation axis to the mean orientation. Such a line is called fibre and we can use the command fibre.fit to find the best fitting fibre for a given list of orientations. Lets do this for a single grain. 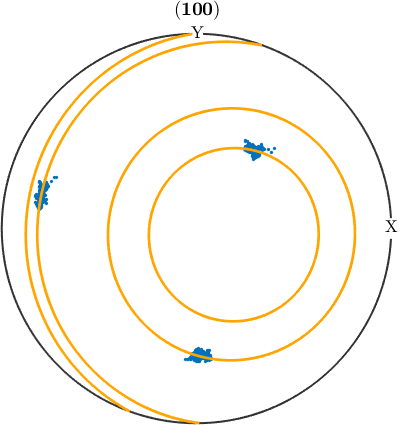 The function fibre.fit has three output arguments. The first one f is the fittted fibre. From this we can easily detect the prominent misorientation axis in specimen coordinates by f.r and in crystal coordinates by f.h. 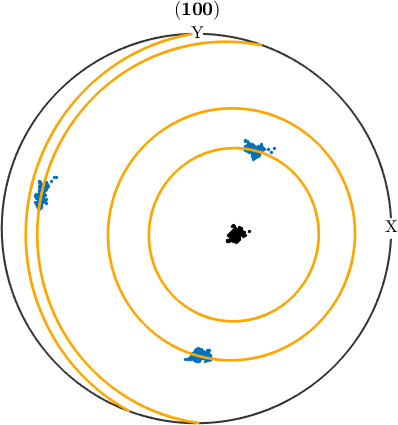 Lets perform the above analysis for all large grains 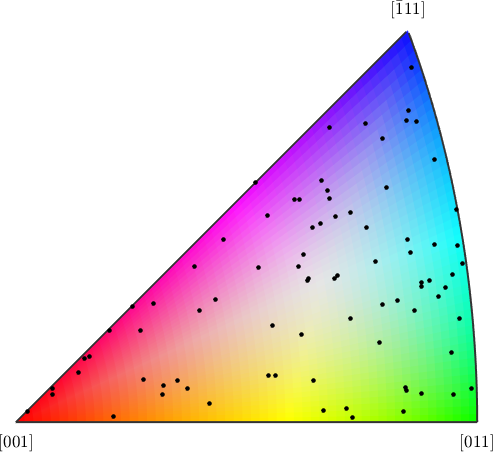 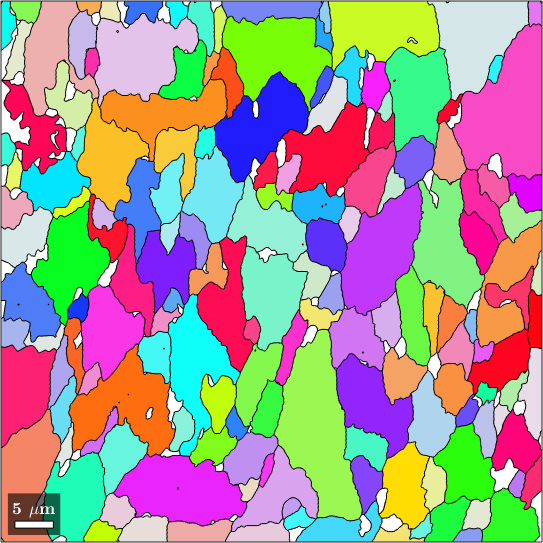 Colorizing the crystal dispersion axes in specimen coordinates is unfortunately much more complicated. In fact, it is mathematically impossible to find a corresponding color key without color jumps. Instead MTEX visualizes axes in specimen coordinates by compass needles which are entirely gray if in the plane and get divided into black and white to indicate which end points out of the plane and which into the plane. 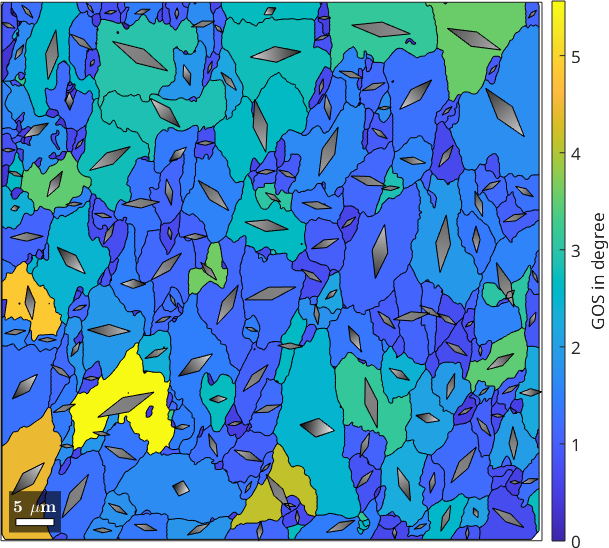 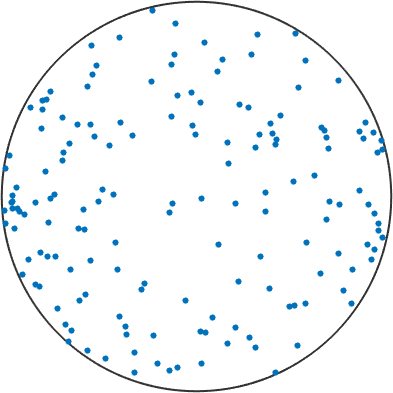 to get some idea about any preferred direction, we can add contours, weighted by the fit. grains with a large mean misorientation angle will also have a more well defined direction of the dispersion axis. 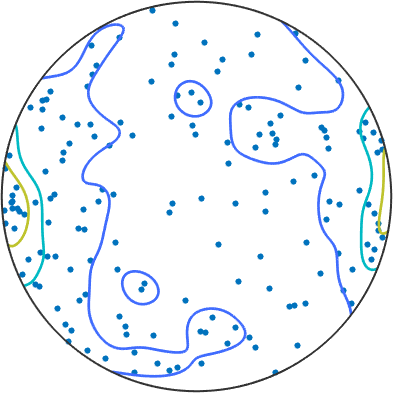 Here we do not see this clear of a picture (maybe because this is a piece of steel which might behave differently, maybe because we do not consider a large enough number of grains) Question: if this is processed steel, which sample directions is pointing to the east?

TODO: Testing on Bingham distribution for a single grain

Although the orientations of an individual grain are highly concentrated, they may vary in the shape. In particular, if the grain was deformed by some process, we are interested in quantifications.

Testing on the distribution shows a gentle prolatness, nevertheless we would reject the hypothesis for some level of significance, since the distribution is highly concentrated and the numerical results vague.