Orientation maps determined by EBSD or any other technique are, as all experimental data, effected by measurement errors. Those measurement errors can be divided into systematic errors and random errors. Systematic errors mostly occur due to a bad calibration of the EBSD system and require additional knowledge to be corrected. Deviations from the true orientation due to noisy Kikuchi pattern or tolerances of the indecing algorithm can be modeled as random errors. In this section we demonstrate how random errors can be significantly reduced using denoising techniques.

Simultanously while denoising orientation maps one can also fill not indexed pixels. This is explained in the section Fill Missing Data.

We shall demonstrate the denoising capabilities of MTEX at the hand of an orientation map of deformed Magnesium. 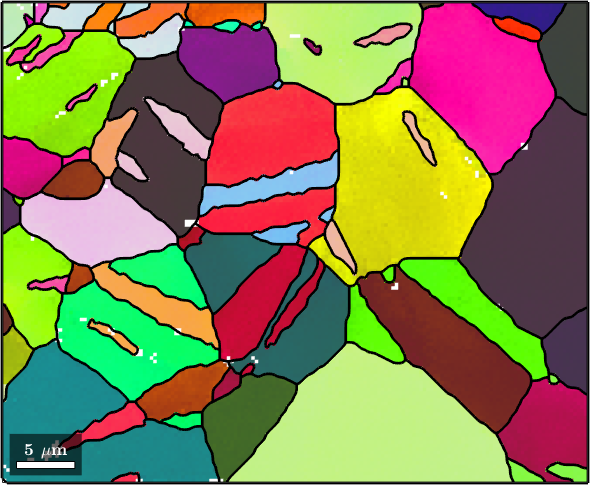 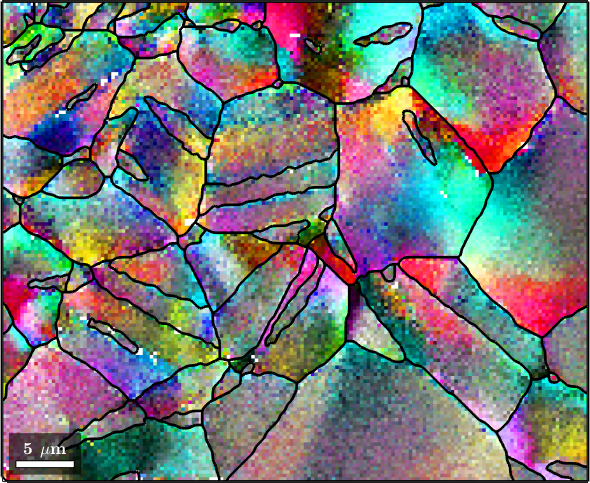 We clearly observe some deformation gradients withing the grains which are superposed by random noise.

The simplest filter to apply to orientation data is the @meanFilter which replaces all orientations by the mean of all neighboring orientations. 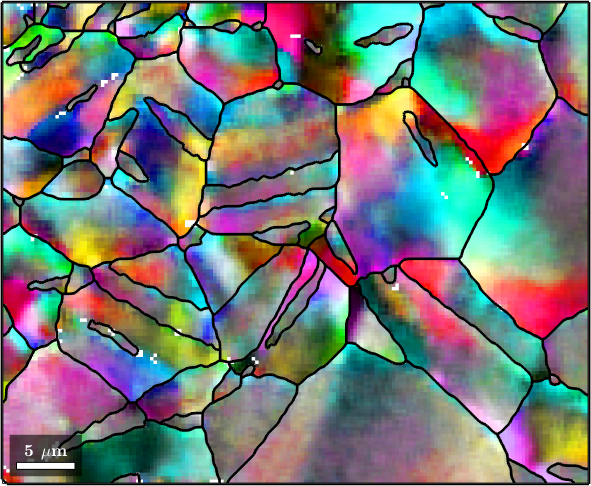 We clearly see how the noise has been reduces. In order to further reduce the noise we may increase the number of neighbours that are taken into account. 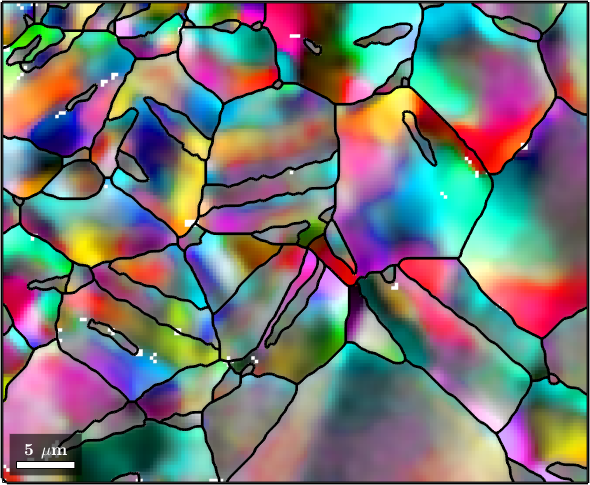 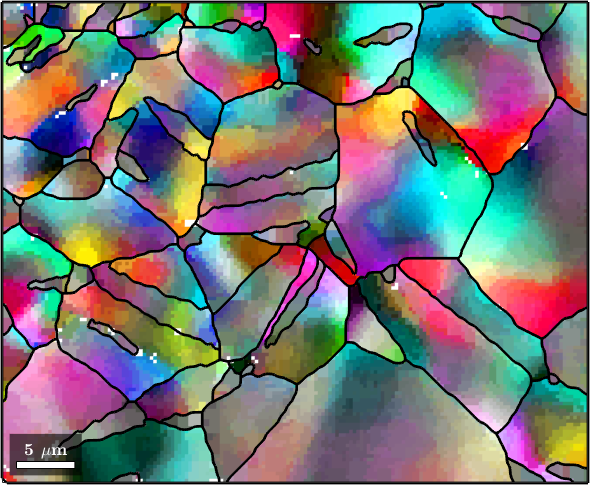 The disadvantage of the median filter is that it leads to cartoon like images which suffer from the staircase effect.

Another filter that was designed to be robust against outliers and does not smooth away subgrain boundaries is the Kuwahara filter. However, in practical applications the results are often not satisfactory. 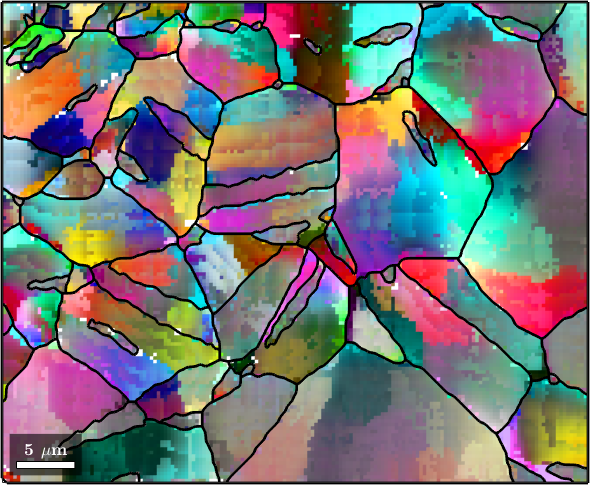 All the above filters are so called sliding windows filters which consider for the denoising operation only neighboring orientations within a certain window. The next filters belong to the class of variational filters which determine the denoised orientation map as the solution of an minimization problem that is simultanously close to the original map and "smooth". The resulting orientation map heavily depends on the specific definition of "smooth" and on the regularization parameter which controls the trade of between fitting the original data and forcing the resulting map to be smooth.

The @splineFilter uses as definition of smoothnes the curvature of the orientation map. As a cosequence, the denoised images are very "round" and similarly as for the @meanFilter subgrain boundaries will be smoothed away. On the positive side the @meanFilter is up to now the only filter that automatically calibrates the regularization parameter. 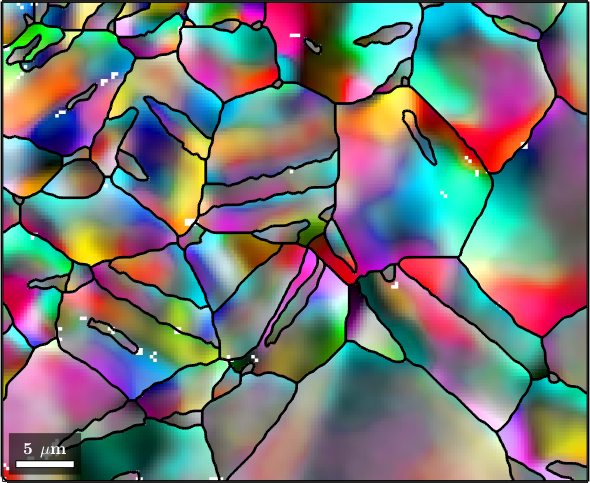 In the default setting the @halfQuadraticFilter uses definition of smoothnes the total variation functional. This functional was developed to preserve subgrain boundaries. Similarly as the @medianFilter it tends to carton like images and staircasing. 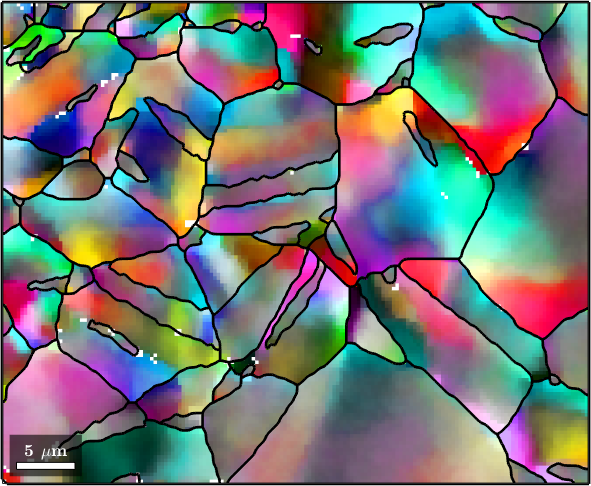 The infimal convolution filter was designed as a compromise between the @splineFilter and the @halfQuadraticFilter. It is still under deveopment and its use is not recommendet. 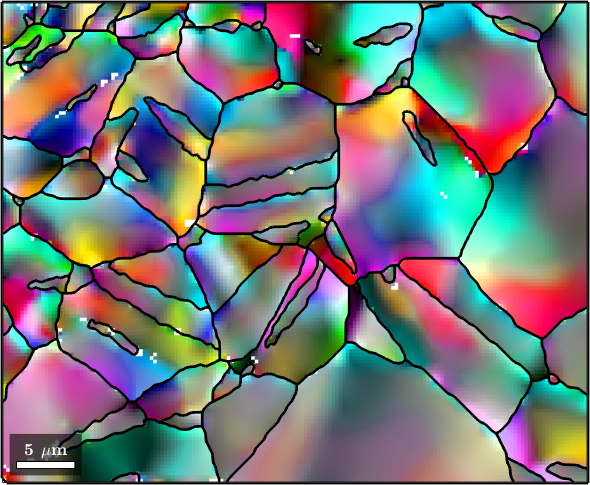