This script demonstrates the tools MTEX offers to reconstruct a parent austenite phase from a measured martensite phase. Most of the ideas are from Crystallography, Morphology, and Martensite Transformation of Prior Austenite in Intercritically Annealed High-Aluminum Steel by Tuomo Nyyssönen. We shall use the following sample data set. 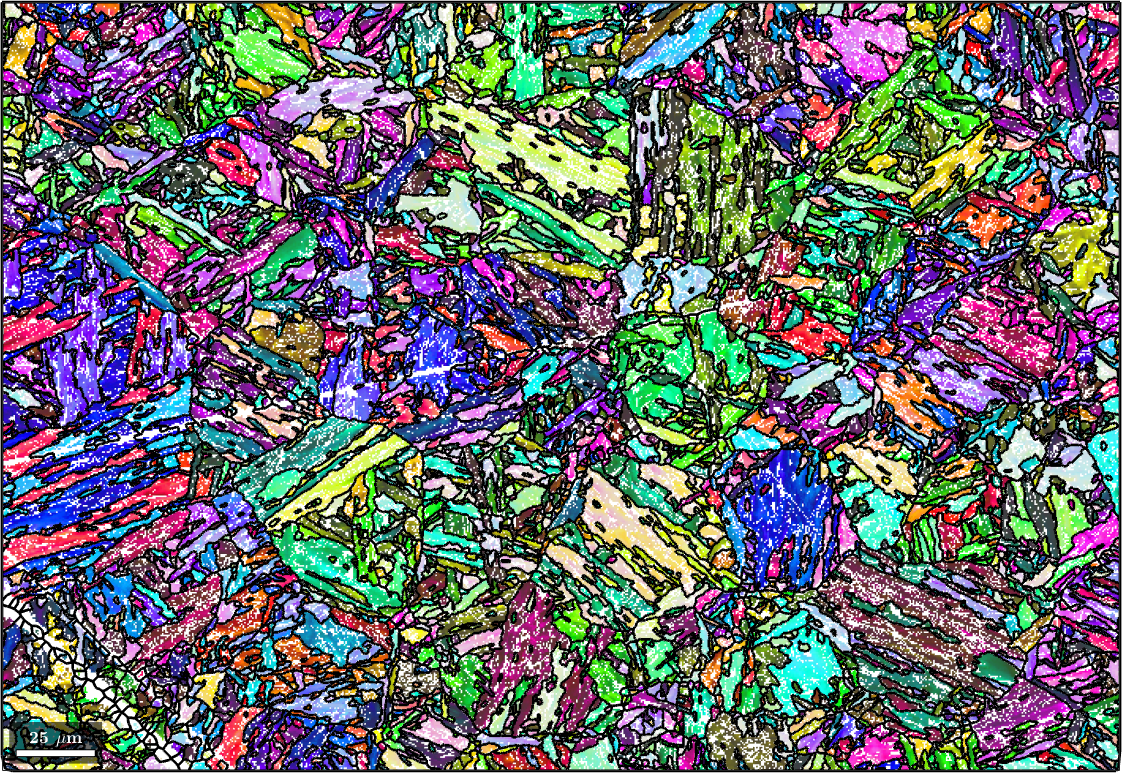 The function calcParent2Child requires as input a list of child to child misorientations or, equivalently, a two column matrix of child orientations. Here we go with the second option and setup this two column orientation matrix from the mean orientations of neighbouring grains which can be found using the command neighbours 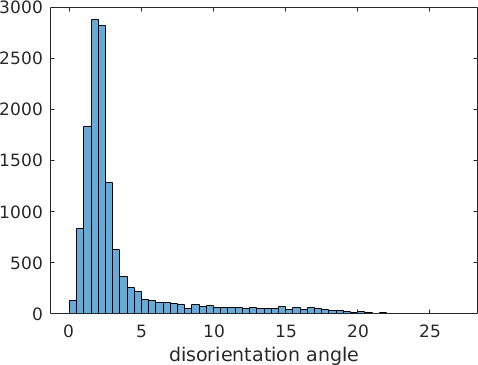 We may also colorize the grain boundaries according to this misfit. To this end we first compute the relationship between pairs of grains grainPairs and the boundary segments stored in grains.boundary using the command selectByGrainId 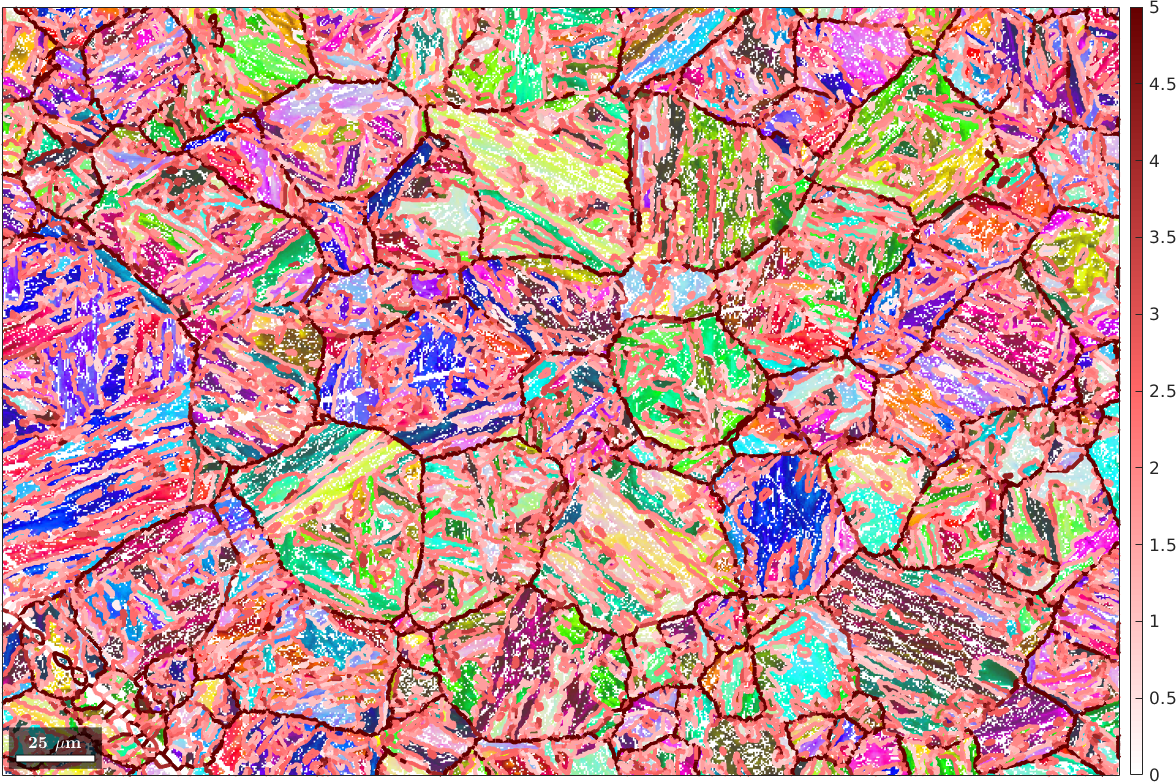 We observe that the boundary segments with a large misfit form large grain shapes which we want to identify in the next steps as the parent grains. 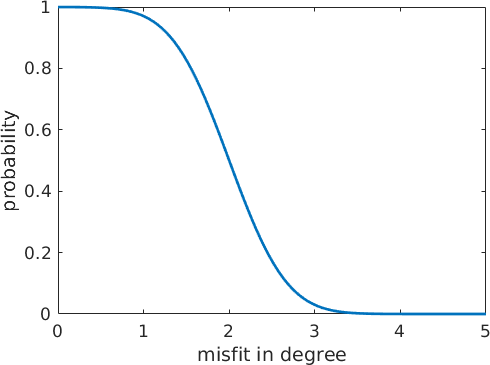 The above diagram describes the probability distribution as a function of the misfit. After filling the matrix A with these probabilities

we can split it into clusters using the command calcCluster which implements the Markovian clustering algorithm. Here an important parameter is the so called inflation power, which controls the size of the clusters.

Let's visualize the first result. Note, that at this stage it is not important to have the parent grains already at their optimal size. Similarly orientated grains can be merged later on. 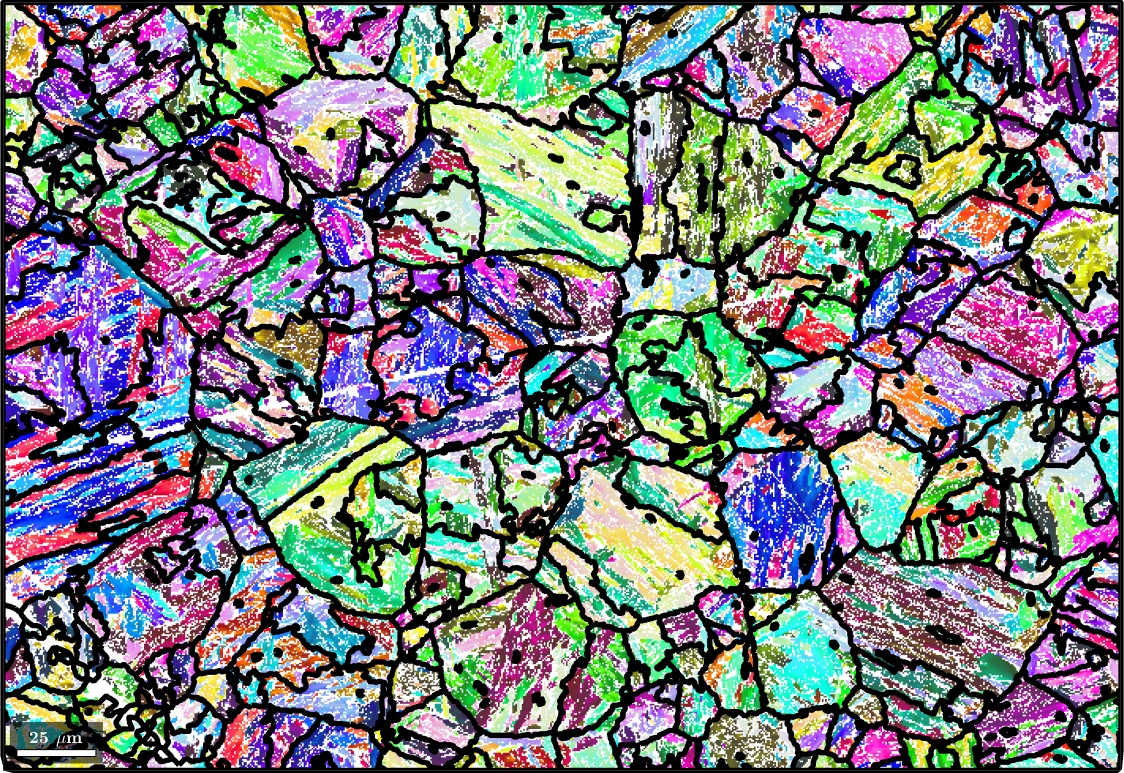 In the next step we compute for each parent grain its parent austenite orientation. This can be done usig the command calcParent. Note, that we ensure that at least two child grains have been merged and that the misfit is smaller than 5 degree. 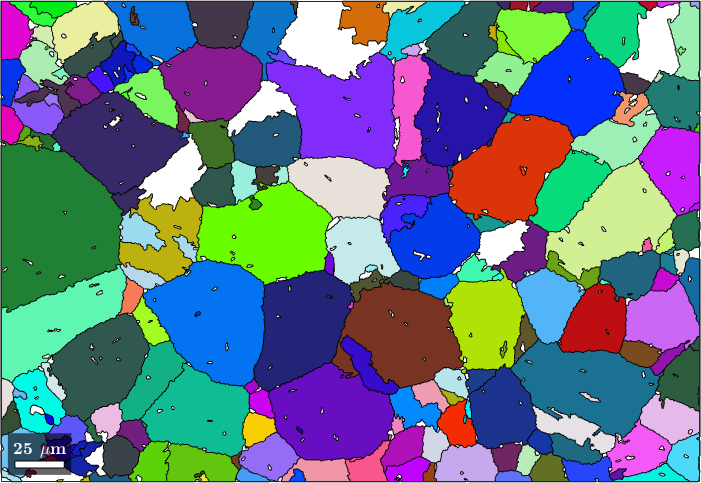 Knowing the parent grain orientations we may compute the |variantId| of each child grain using the command calcVariantId. As a bonus this command returns also the packetId, here defined as the closest {111} plane in austenite to the (011) plane in martensite. 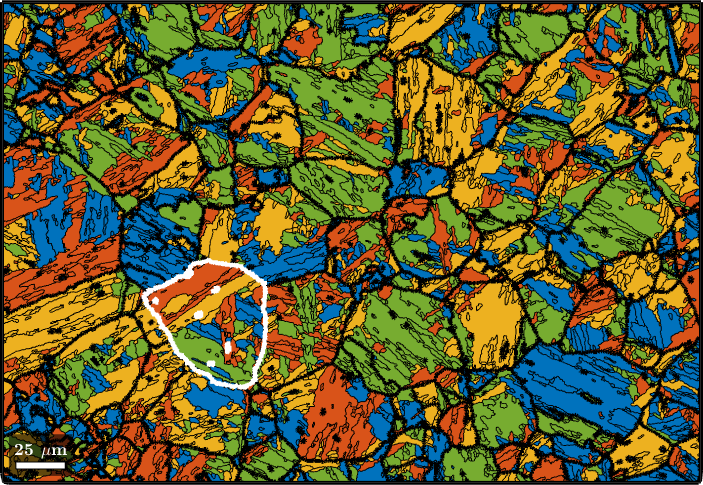 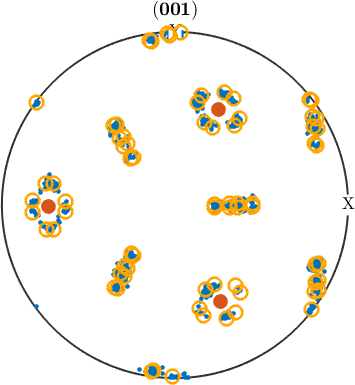 So far our analysis was at the grain level. However, once parent grain orientations have been computed we may also use them to compute parent orientations of each pixel in our original EBSD map. To this end we first find pixels that now belong to an austenite grain. 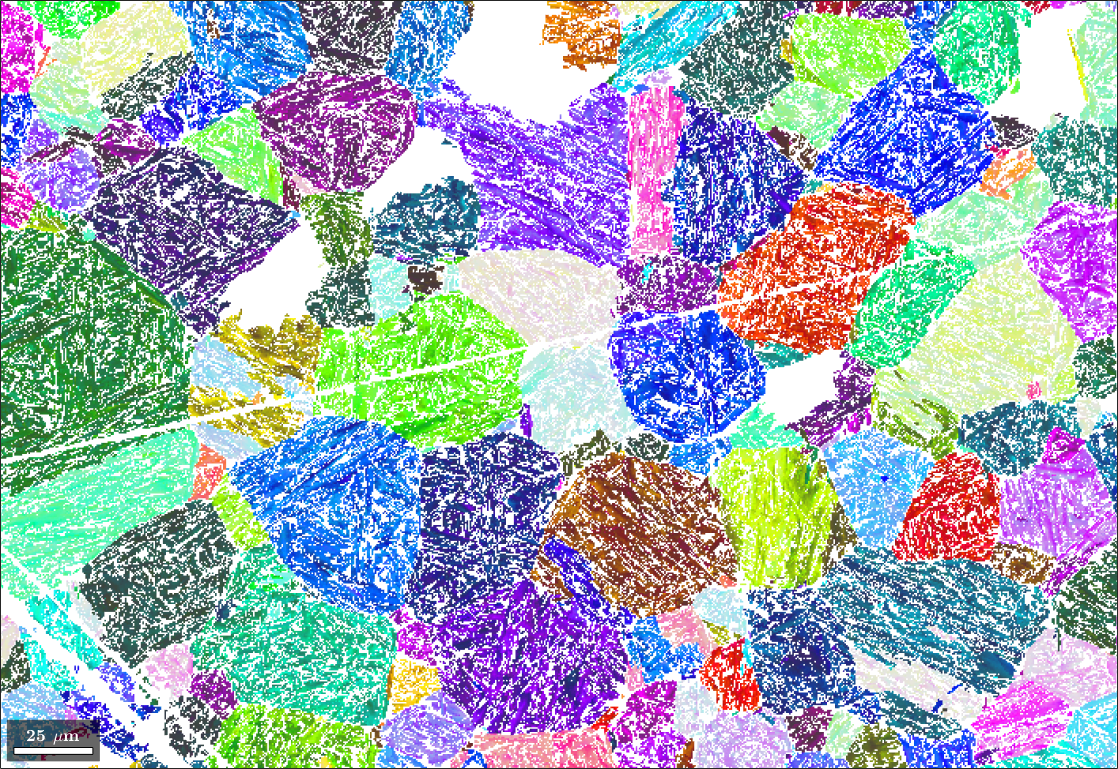 As a second output argument we obtain the misfit between the parent orientation computed for the pixel and the mean orientation of the corresponding parent grain. Let's plot this misfit as a map. 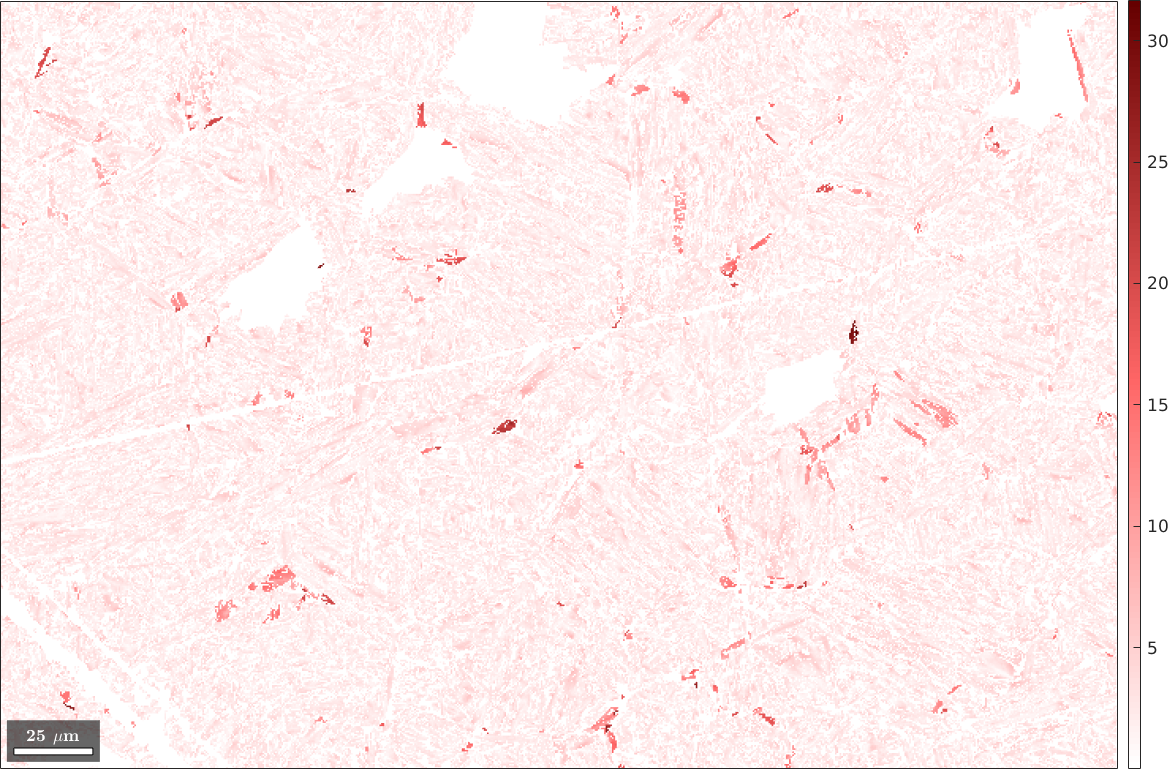 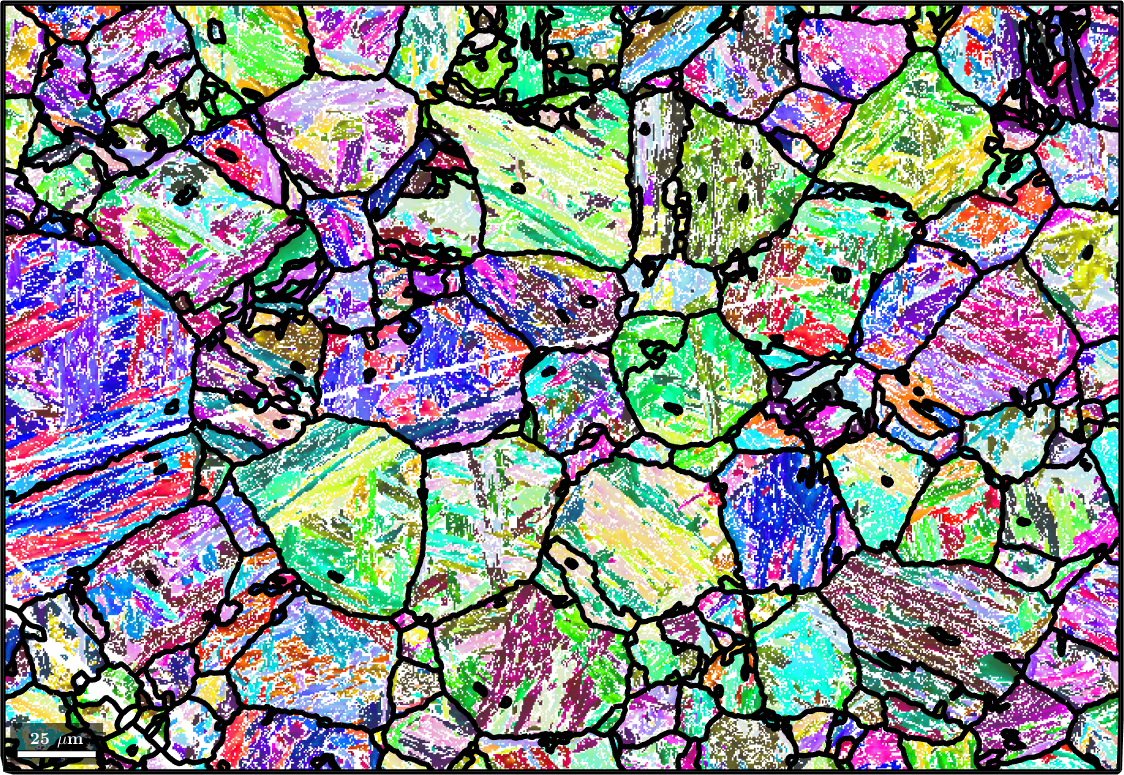 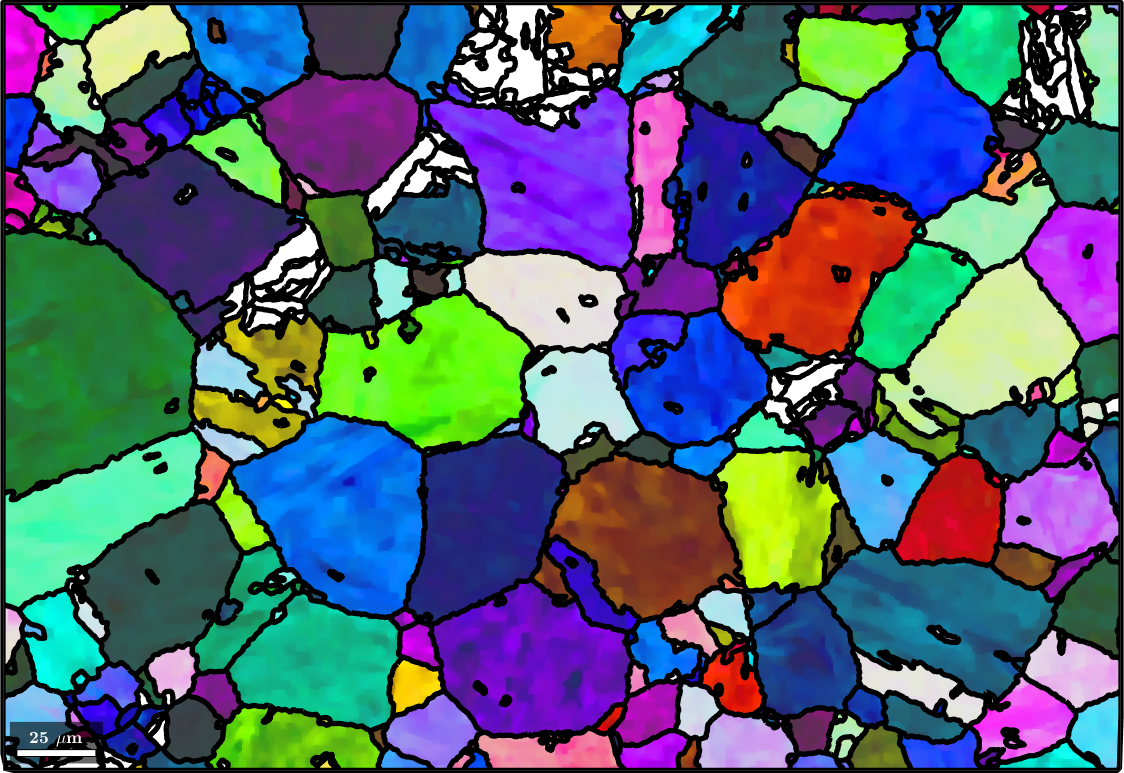 A problem of the boundary based reconstuction algorithm is that often child variants of different grains have a misorientation that is close to the theoretical child to child misorientation. One idea to overcome this problem is to analyze triple junctions. Now all three child orientations must fit to a common parent orientations. This fit is computed by the command calcParent.

Lets visualize this misfit by colorizing all triple junctions accordingly. 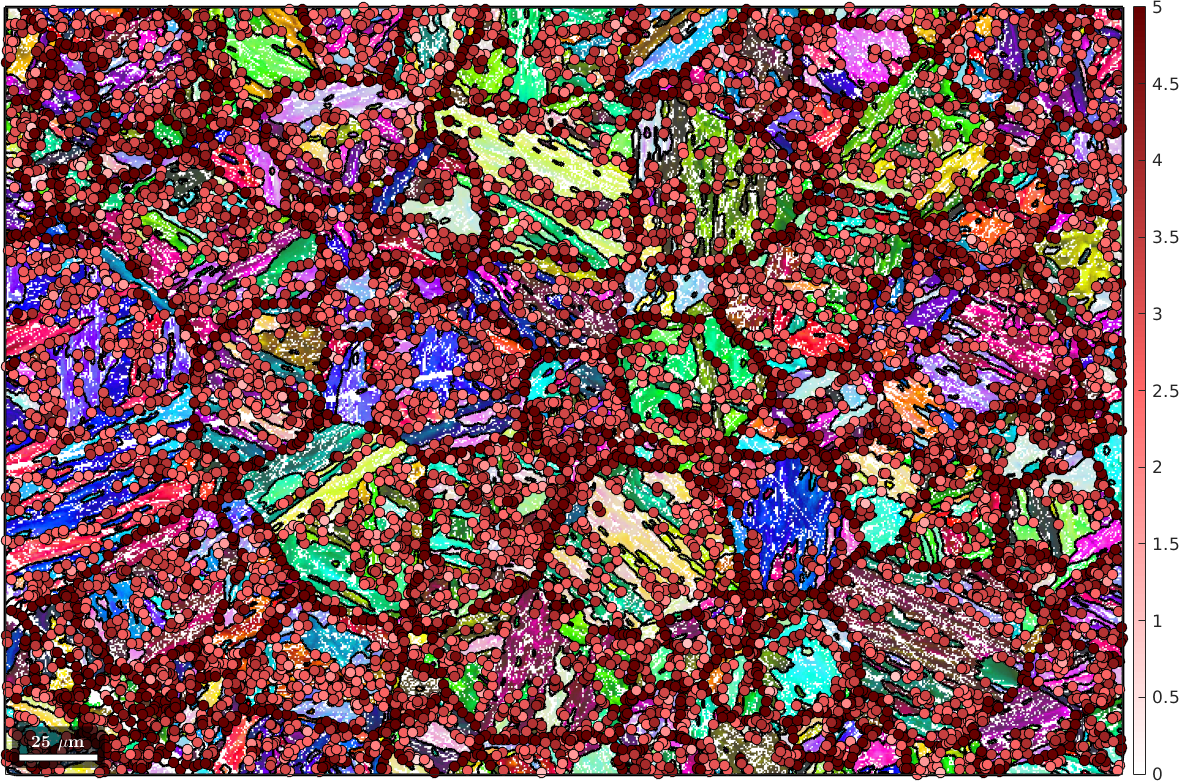 Again we observe, that triple junctions with large misfit outline the shape of the parent grains. In order to identify these parent grains we proceed analogously as for the boundary based analysis. We first set up a similarity matrix between grains connected to the same triple points and than use the Markovian clustering algorithm to detect clusters of child grains, which are than merged into parent grains.

Let's visualize the result. Afterwards, we can proceed analogously as for the boundary based parent grain reconstruction described above. 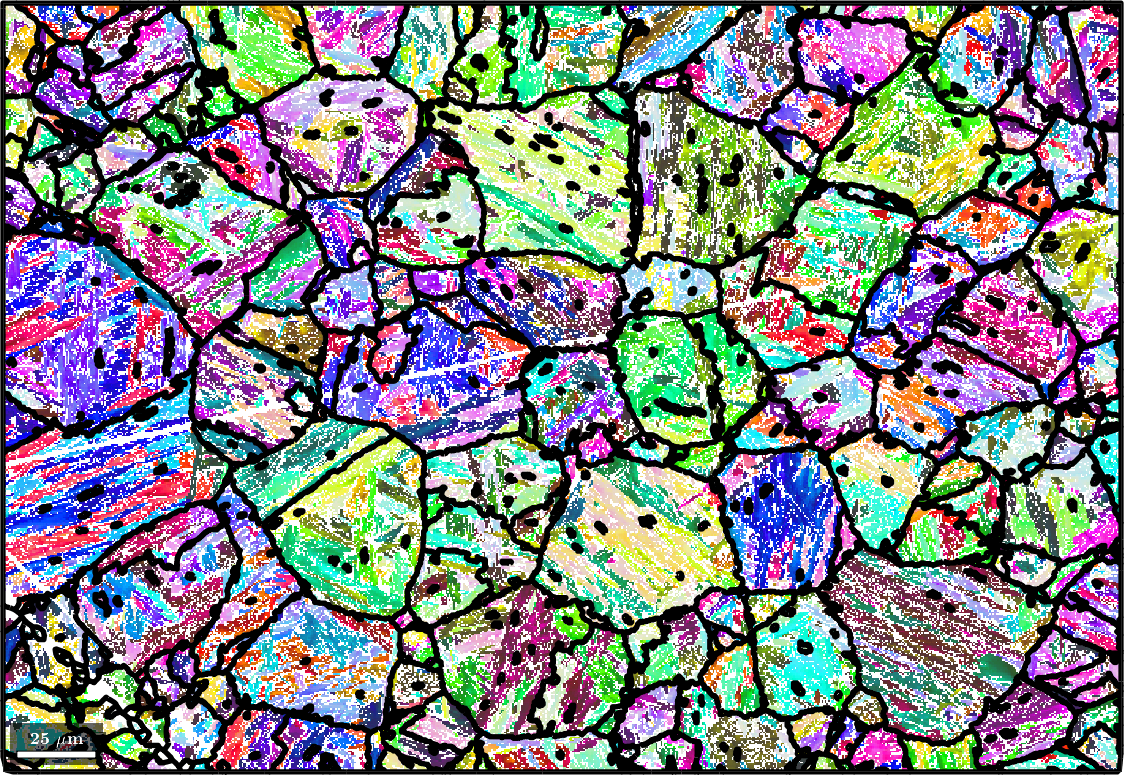