This section gives you an overview of the functionality MTEX offers to visualize spatial orientation data. Let us first import some sample EBSD data.

By default, MTEX plots a phase map for EBSD data.

You can access the color of each phase by

These values are RGB values which can be altered to any other RGB triple. A more convinient way for changing the color is the function str2rgb which converts color names into RGB triplets

By default, not indexed phases are plotted as white and it is impossible to assign a different color as we did it for real phases. Instead we need to use option FaceColor to specify the color directly in the plotting command.

Apart from the phase information, we can use any other property to colorize the EBSD data. As an example, we may plot the band contrast

Actually, we can pass any list of numbers or colors as a second input argument to be visualized together with the ebsd data. In order to visualize orientations in an EBSD map, we have first to compute a color for each orientation. The most simple way is to assign to each orientation its rotational angle. This is done by the command

Obviously, the rotational angle is not a very distintive representative for orientations. A more common approach is to define a colorization of the fundamental secor of the inverse pole figure, a so called ipf color key, and to colorize orientations according to their position in a fixed inverse pole figure. Let's consider the following standard key. 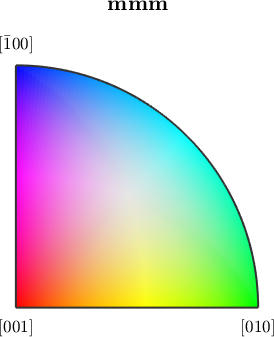 Next we may utilize this key to turn the orientations into colors, which are than passed to the plot command.

The above ipf color key can be largely customizied. This is explained in more detail in IPF Maps. Beside IPF maps there are also more specific ways to colorize orientations as they are discussed in Advanced Plotting.