In this section we discuss the austenite (fcc) to ferrite (bcc) phase transformation on the example of an EBSD data set collected on a plessitic microstructure of the Emsland iron meteorite. Plessite is the greek description for filling iron and occurs as remaining volumes between the already transformed kamacite (bcc in meteorites) rims. Plessite regionons are commonly surrounded by a very thin taenite (fcc) ribbons. The filling iron contains as major phases again bcc and fcc, where the orientation of fcc practically always indicates the orientation of the formerly huge fcc grain in the planetary body which can easily reach the dimension of meters.

The following lines plot bcc according to the crystallographic description of the selected reference direction (IPF coloring), whereas austeniteis displayed as phase in blue. 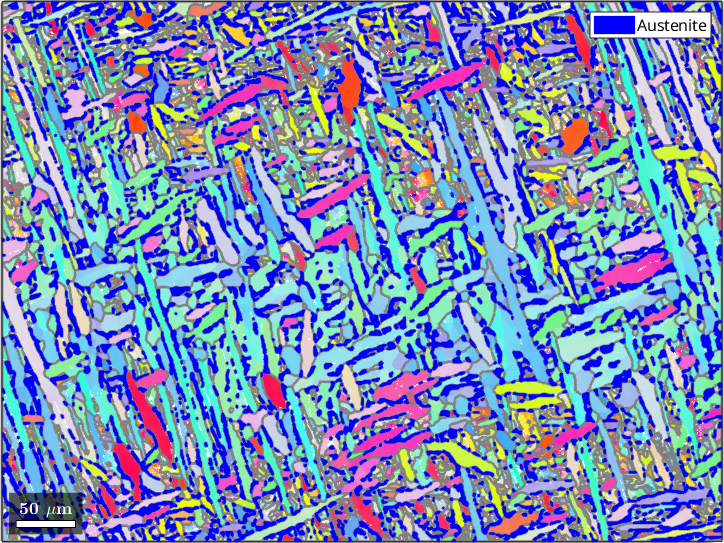 As expected, we recognize very small remaining fcc grains. This high-temperatur phase is stabilized by the increasing nickel content during transformation. The low-temperature bcc phase can solve in maximum only 6\% nickel so that fcc has to assimilate the excess nickel. Size and amount of fcc is therefore and indication of the overall nickel content. Considering only the parent fcc phase and plotting the orientations into an axis angle plot 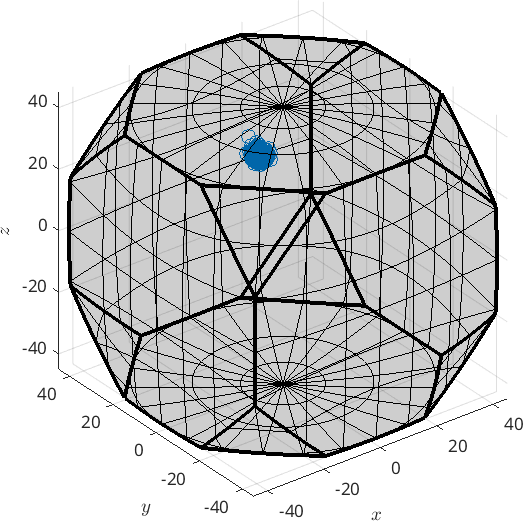 we recognize the uniform orientation of all fcc grains. Deviations are assumed to be the result of deformations during high-speed collisions in asteroitic belt. We can get this parent grain orientation by taking the mean and compute the fit by the command std

Next we display the bcc orientations (blue dots) in pole figures, and additionally we plot on top of them the parent taenite orientation (red dots).

The partial coincidence of bcc and fcc poles suggests an existing of a crystallographic orientation relationship between both phases. The Kurdjumov-Sachs (KS) orientation relationship model assumes a transition of one of the {111}-fcc into one of the {110}-bcc planes. Moreover, within these planes one of the 110 directions of fcc is assumed to remain parallel to one of the 111 directions of the formed bcc. Since for cubic crystals identically indexed (hkl) and [uvw] generate the same directions, the derived pole figures can be used for both, the evaluation of directions as well as lattice plane normals.

Although we could alternatively use the MTEX command orientation.KurdjumovSachs(cs_aus,cs_bcc), let us define the orientation relationship explicitely:

In order to quantify the match between the Kurdjumov-Sachs model and the actual orientation relationship in the specific plessitic area, we can compute as simplest indicator the mean angular deviation between all parent-to-child misorientaitons and the KS model

We may have asked ourselfs whether there is an orientation relationship that better matches the measured misorientations than proposed by the KS model. A canocial candidate would be the mean of all misorientations. 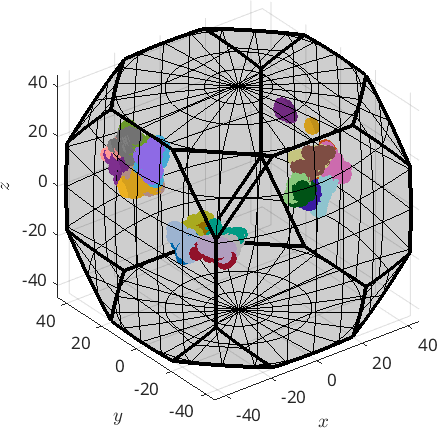 A more important classification is the seperation of the variants into packets.

As we can see from the above pole figures the red, blue, orange and green orientations are distinguished by which of the symmetrically equivalent (111) austenite axes is aligned to the (110) martensite axis.

We may also use the packet color to distinguish different Martensite packets in the EBSD map. 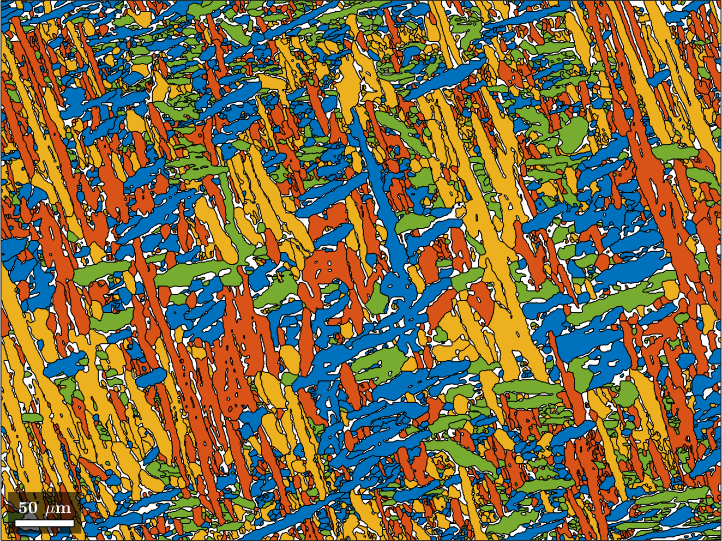