In this section we discuss parent grain reconstruction at the example of a titanium alloy. Lets start by importing a sample data set 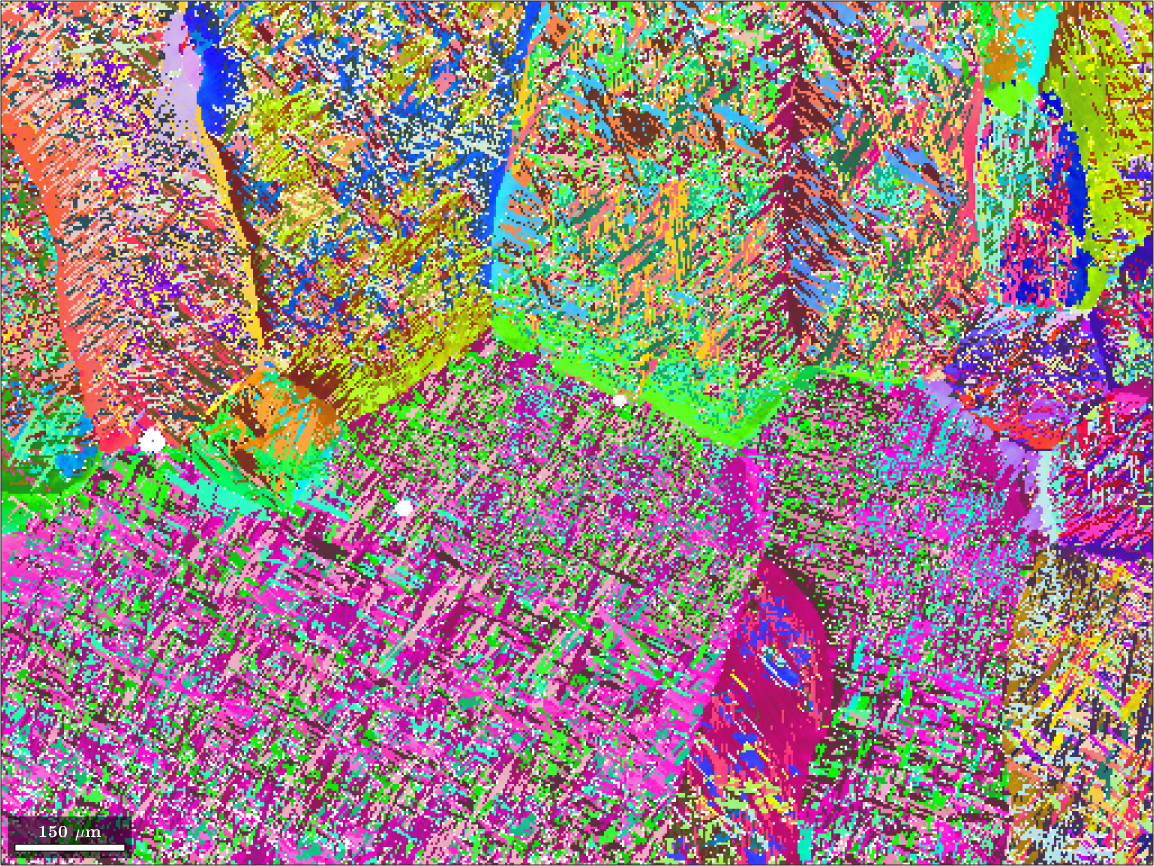 The data set contains 99.8 percent alpha titanium and 0.2 percent beta titanium. Our goal is to reconstuct the original beta phase. The original grain structure appears almost visible for human eyes. Our computations will be based on the Burgers orientation relationship

Note that all MTEX functions for parent grain reconstruction expect the orientation relationship as parent to child and not as child to parent.

Detecting triple points that belong to the same parent orientation 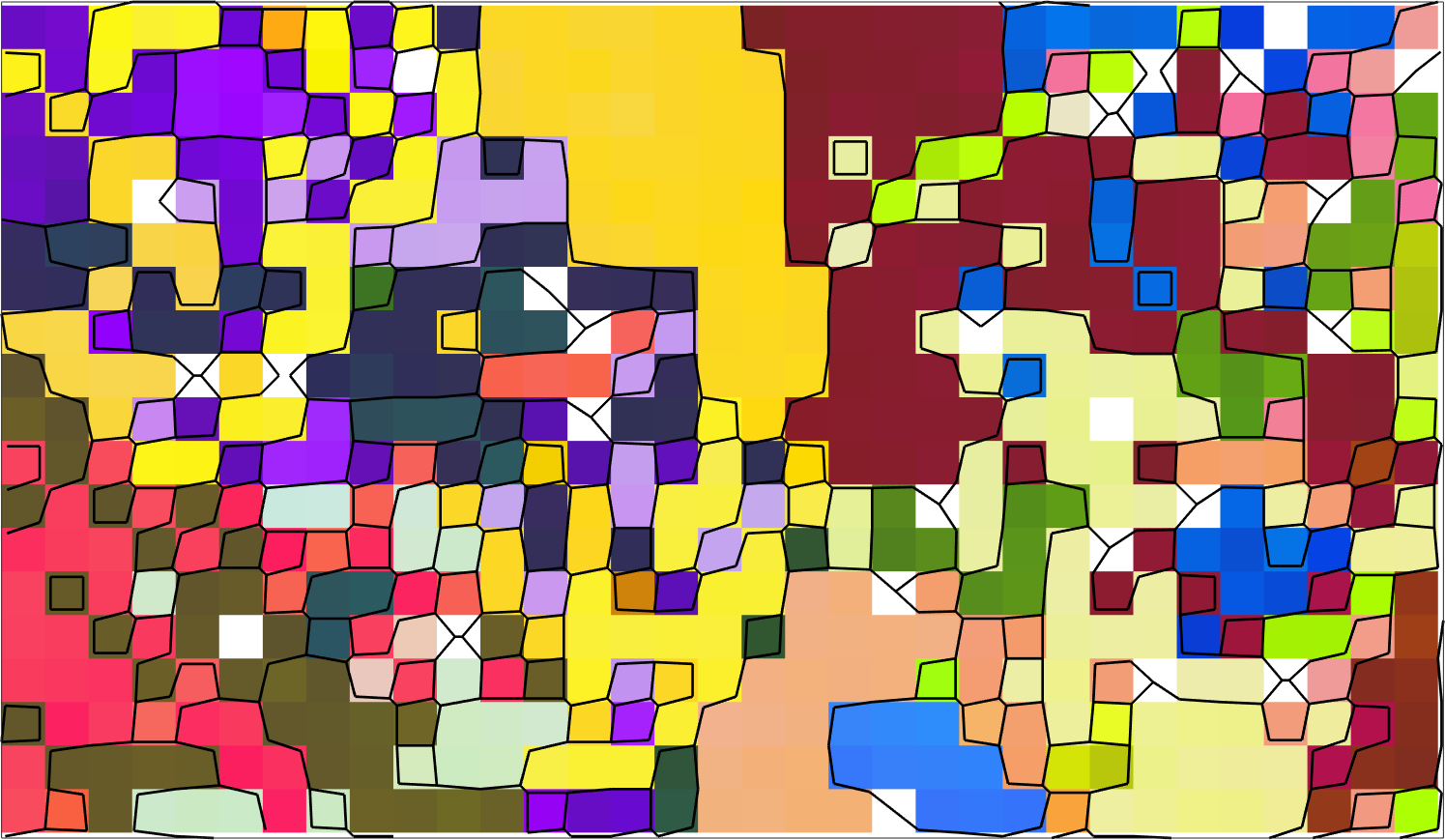 Above we have plotted only a very small subregion of the original data set to make the seperation of the qudruple junctions better visible.

The command calcParent returns for each child orientation a parentId which allows us later to compute the parent orientation from the child orientation. Furthermore, the command return for each triple junction the misfit between the adjecent parent orientations in radiant. Finally, the option 'numFit',2 causes calcParent to return not only the best fit but also the second best fit. This will be used later. First we simple colorize the triple junctions according to the best fit. 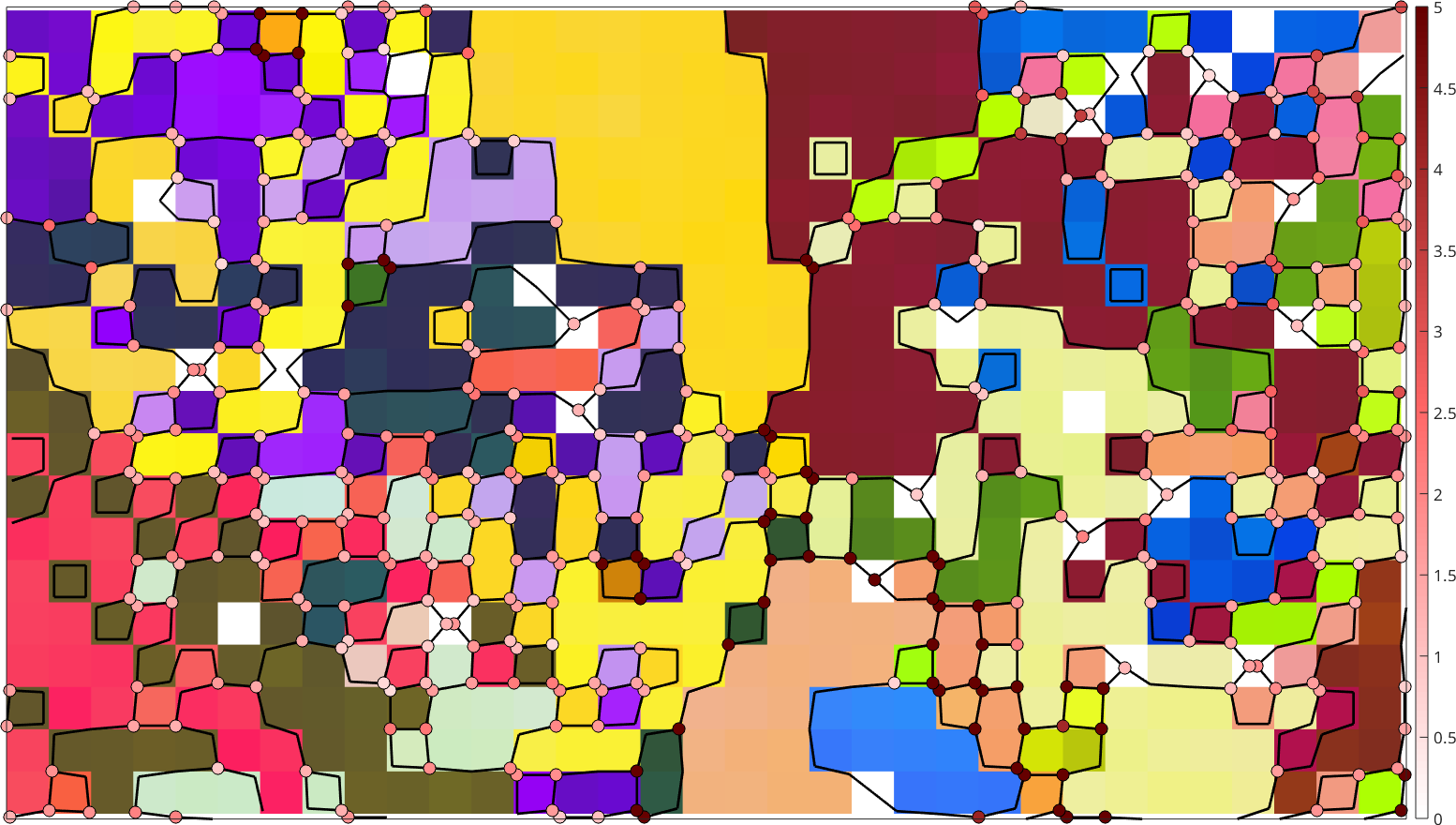 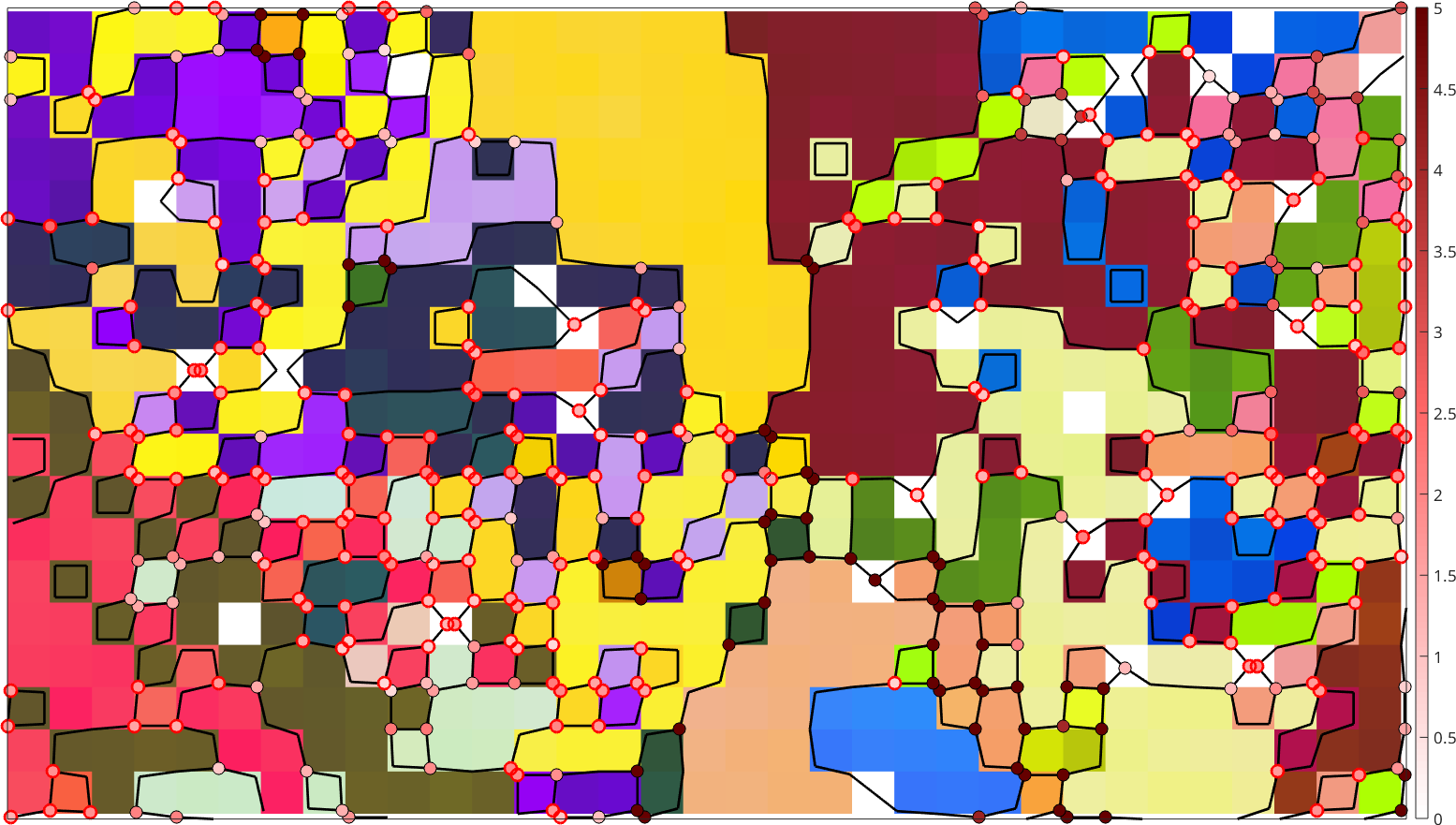 We observe that despite the quite sharp threshold we have many consistent triple points. In the next step we check wether all consistent triple junctions of a grain vote for the same parent orientation. Such a check for consistent votes can be computed by the command majorityVote using the option strict.

The command majorityVote returns for each grain with consistent parentId votes this unique parentId and for all other grains NaN. The second output argument gives the number of these votes 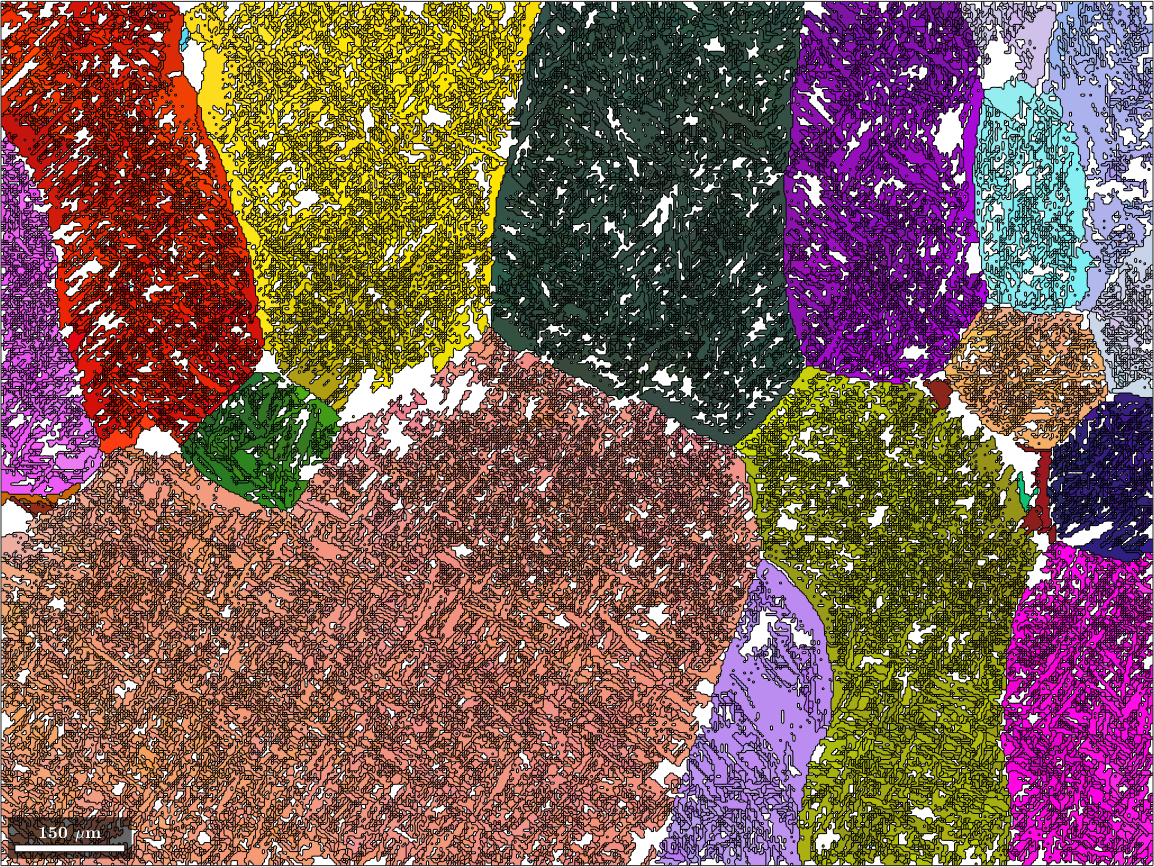 We observe that this first step already results in very many Beta grains. However, the grain boundaries are still the boundaries of the original alpha grains. To overcome this, we merge all Beta grains that have a misorientation angle smaller then 2.5 degree.

As an additional consistency check we verify that each parent grain has been reconstructed from at least 2 child grains. To this end we first make a testrun the merge operation and then revert all parent grains that that have less then two childs. This step may not nessesary in many case.

Now we perform the actual merge and the reconstruction of the parent grain boundaries. 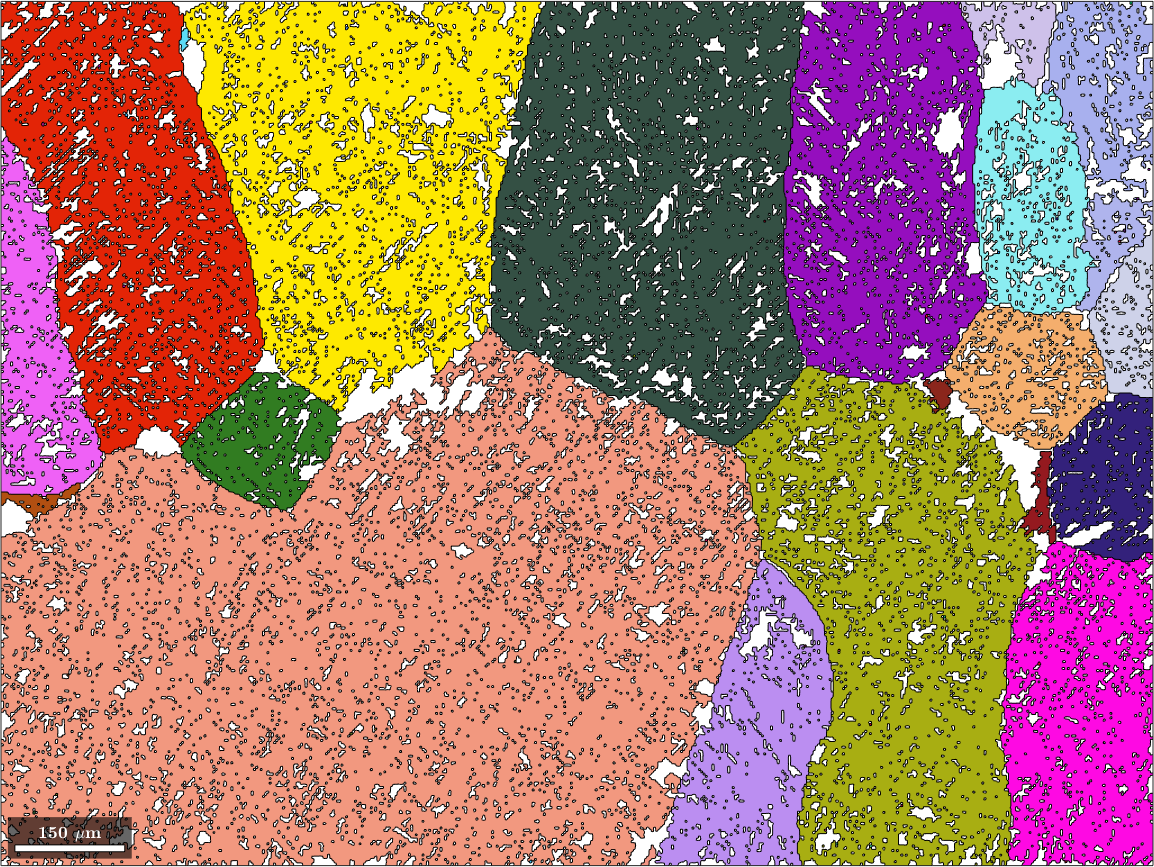 After the first two steps we have quite some alpha grains have not yet transformed into beta grains. In order to merge those left over alpha grains we check whether their misorientation with one of the neighbouring beta grains coincides with the parent to grain orientation relationship and if yes merge them evantually with the already reconstructed beta grains.

First extract a list of all neighbouring alpha - beta grains

and check how well they fit to a common parent orientation

Similarly, as in the first step the command calcParent returns a list of parentId that allows the convert the child orientations into parent orientations using the command variants and the fitting to the given parent orientation. Similarly, as for the triple point we select only those alpha beta pairs such that the fit is below the threshold of 2.5 degree and at the same time the second best fit is above 2.5 degree. 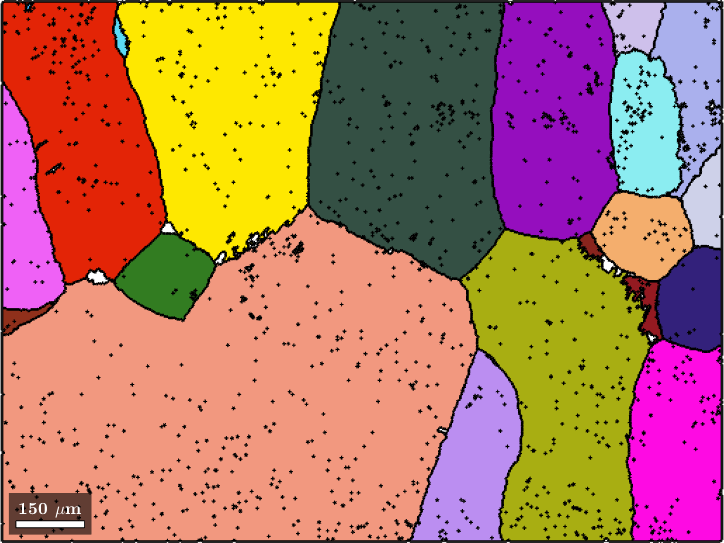 The above step has merged

percent. One way to proceed would be to repeat the steps of this section multiple time, maybe with increasing threshold, until the percentage of reconstructed beta grains is sufficiently high. Another approach in to consider the left over alpha grains as noise and use denoising techniques to replace them with beta orientations. This will be done in the last section.

Until now we have only recovered the beta orientations as the mean orientations of the beta grains. In this section we want to set up the EBSD variable parentEBSD to contain for each pixel a reconstruction of the parent phase orientation.

Therefore, we first identify all pixels that previously have been alpha titanium but now belong to a beta grain. 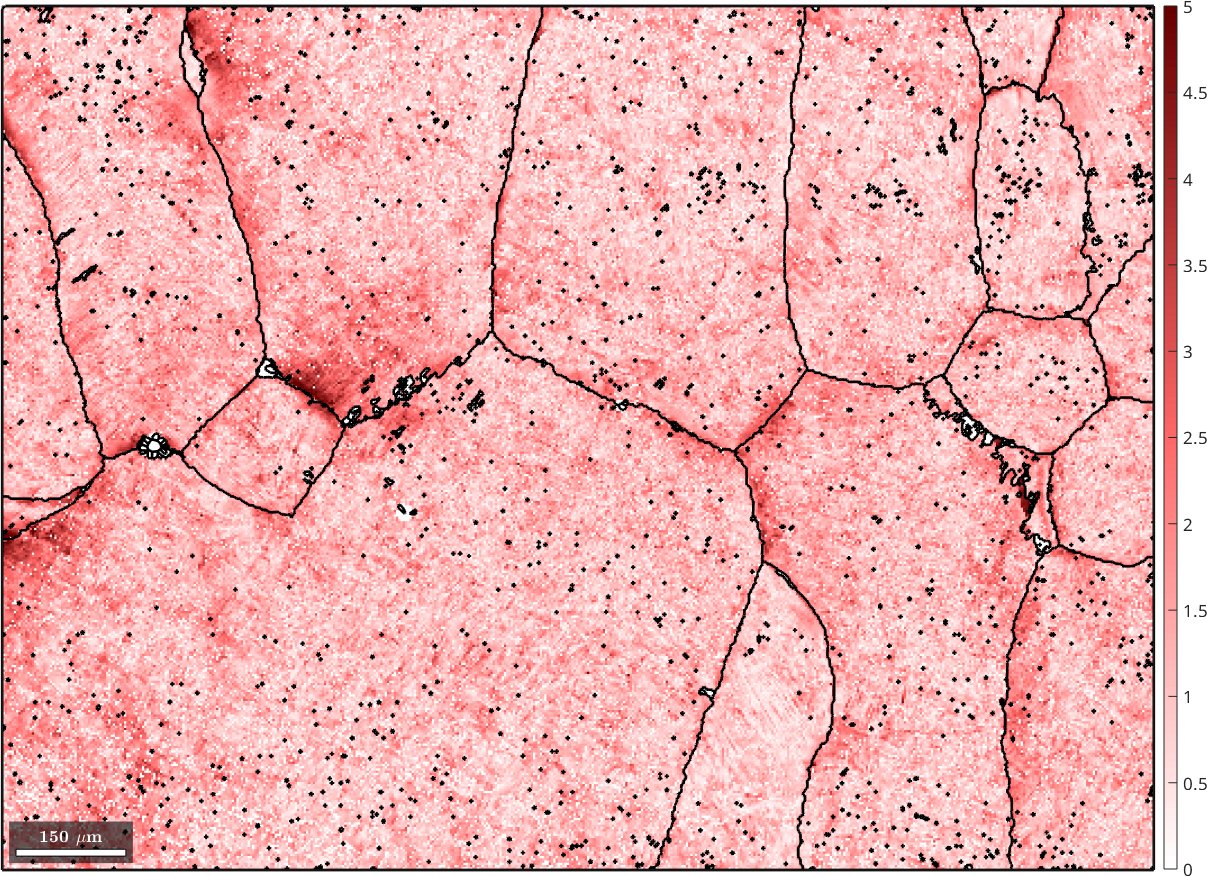 Denoising of the reconstructed beta phase

As promised we end our discussion by applying denoising techniques to fill the remaining holes of alpha grains. To this end we first reconstruct grains from the parent orientations and throw away all small grains

Finally, we denoise the remaining beta orientations and at the same time fill the empty holes. We choose a very small smoothing parameter alpha to keep as many details as possible. 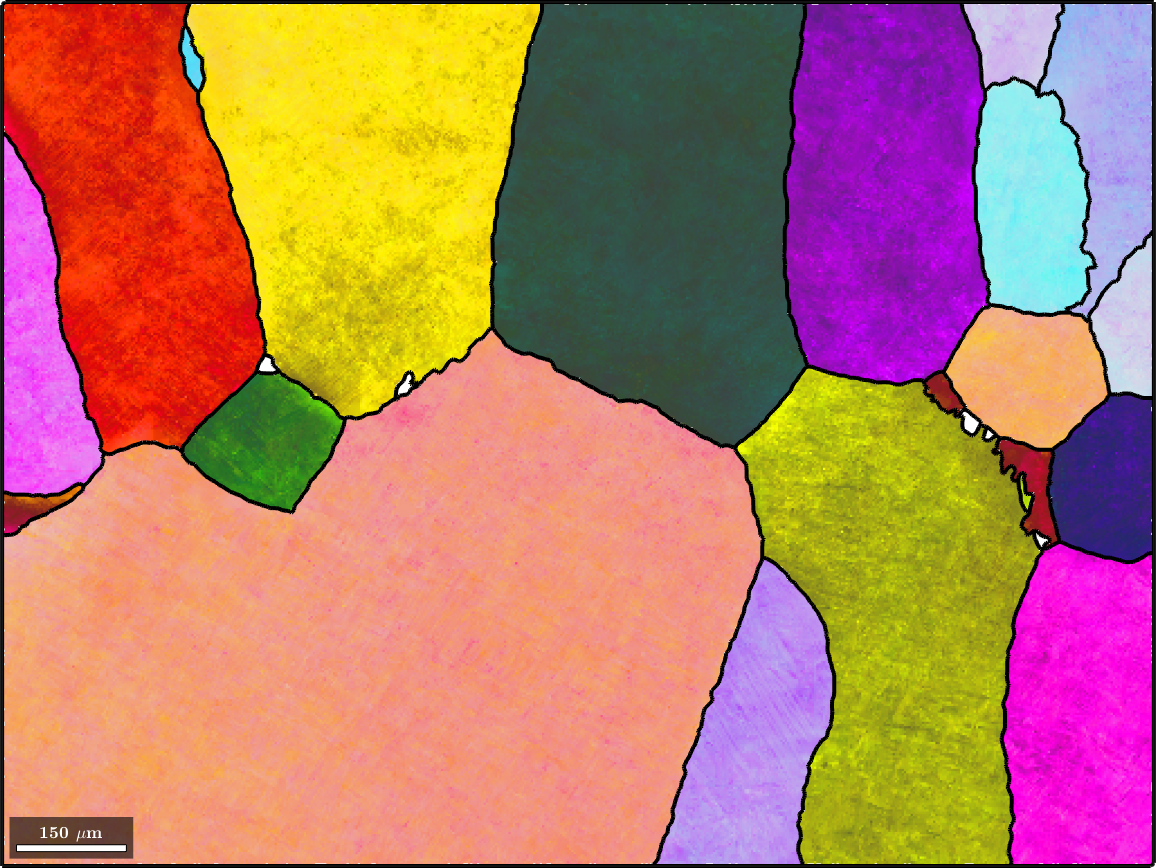 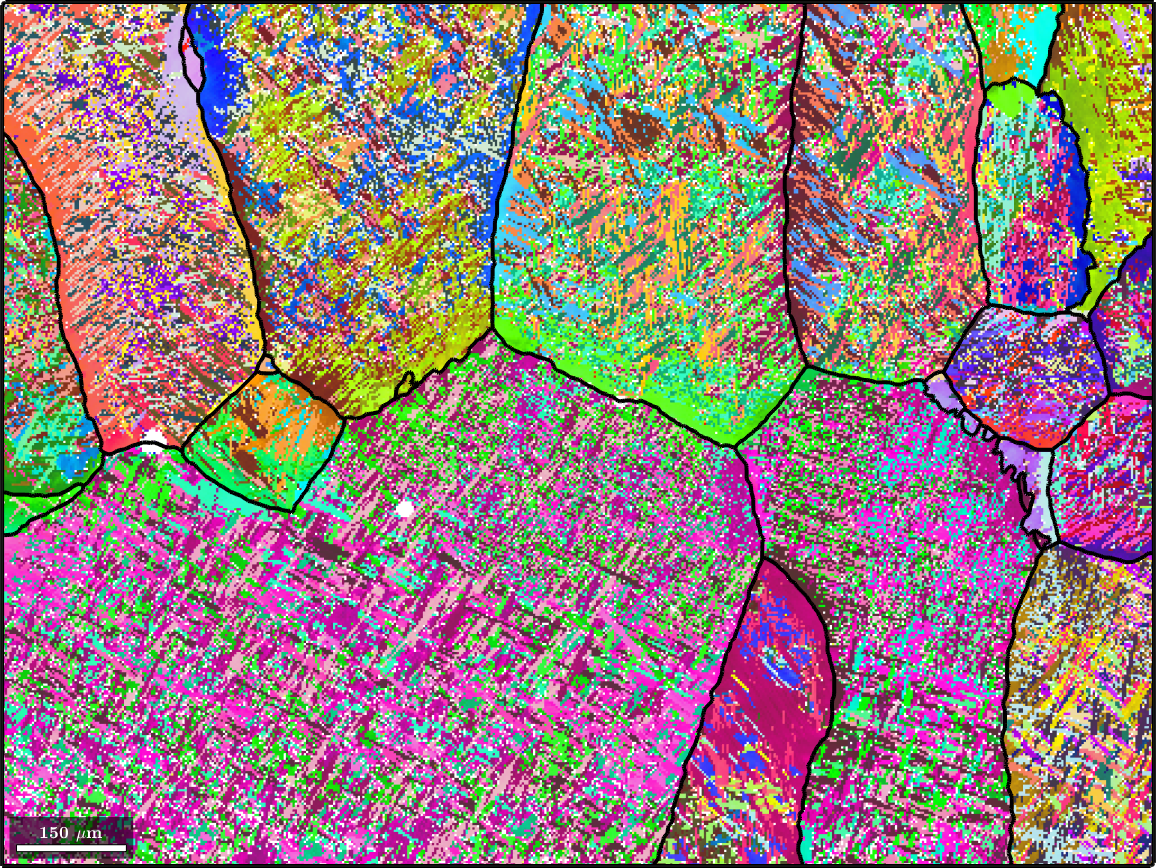 Visualize the misorientation to the mean reveals quite some fine structure in the reconstructed parent orientations. 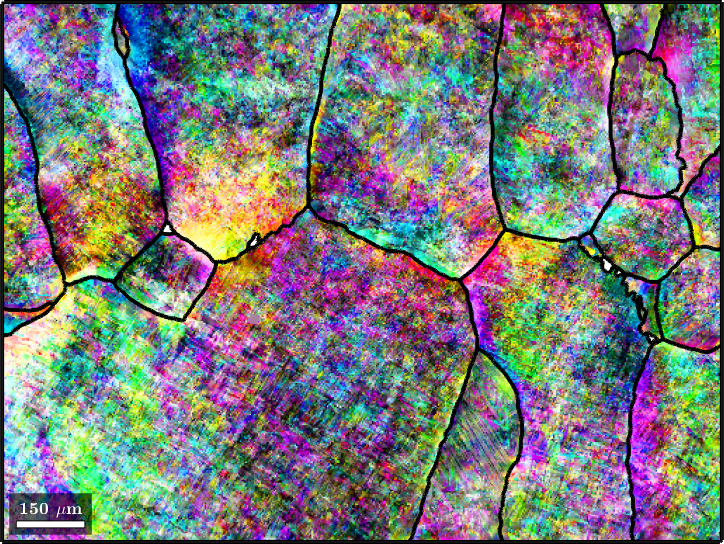