MTEX support the following formats for storing and importing of ODFs:

Importing ODF data into MTEX means to create an ODF variable from data files containing Euler angles and weights. Once such an variable has been created the data can be analyzed and processed in many ways. See e.g. ODFCalculations. The most simplest way to import ODF data is to use the import wizard, which can be started either by typing into the command line 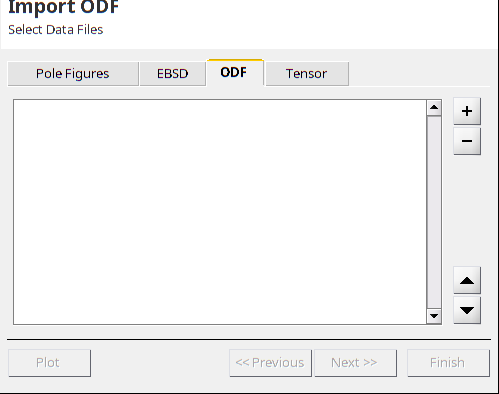 The import wizard provides a gui to import data of almost all ASCII data formats and allows to save the imported data as an ODF variable to the workspace or to generate a m-file loading the data automatically.

A script generated by the import wizard typically look as follows.

So far ODFs may only exported from and imported into ASCII files that consists of a table of orientations and weights. The orientations may be given either as Euler angles or as quaternions. The weight may either represent the value of the ODF at this specific orientation or it may represent the volume of a bell shaped function centered at this orientation.